This week, Mary Kaye looks back at Round 7 against the Newcastle Knights at Hunter Stadium. You can catch up on Mary Kaye's blogs at Ladies who League here

Last weekend my wish finally came true.  Following our victory against the Newcastle Knights at Hunter Stadium on Sunday, the Parramatta Eels FINALLY brought back the winner's selfie (well… it's not quite a selfie, but I'll take it). With that win against the Newcastle Knights, the Parramatta Eels are finally back in the winner's circle and doesn't it feel good.

There was so much to get excited about in the win against Newcastle. The one word that captures the victory, for me though, is courage. With 2 teams coming off the back of a 2 straight losses, there was desperation on both sides of the playing field. To come back from 12-0 down and to grind out a victory in circumstances where the score line resembled a see-saw is something that our boys can be very proud of. But, the commitment shown in defence and the energy shown in attack is something which we need to try and emulate each and every week. If we do that, I have no doubt that the Parramatta Eels will feature come September.

I want to take this opportunity to celebrate some of the performances on the weekend. Whilst it was a team effort, for me, there were some players that really stood out.

Firstly, for tremendous courage - David Gower. Anyone that reads these blogs, knows that Gowie is my favourite player at the Eels. To see him play on on Sunday afternoon with a finger fracture was inspiring. Gowie stayed on the field, even after being able to see bone gaping through the injury. In true Gowie fashion, he still responded to every tweet on social media - who knew that he was a comedian as well! 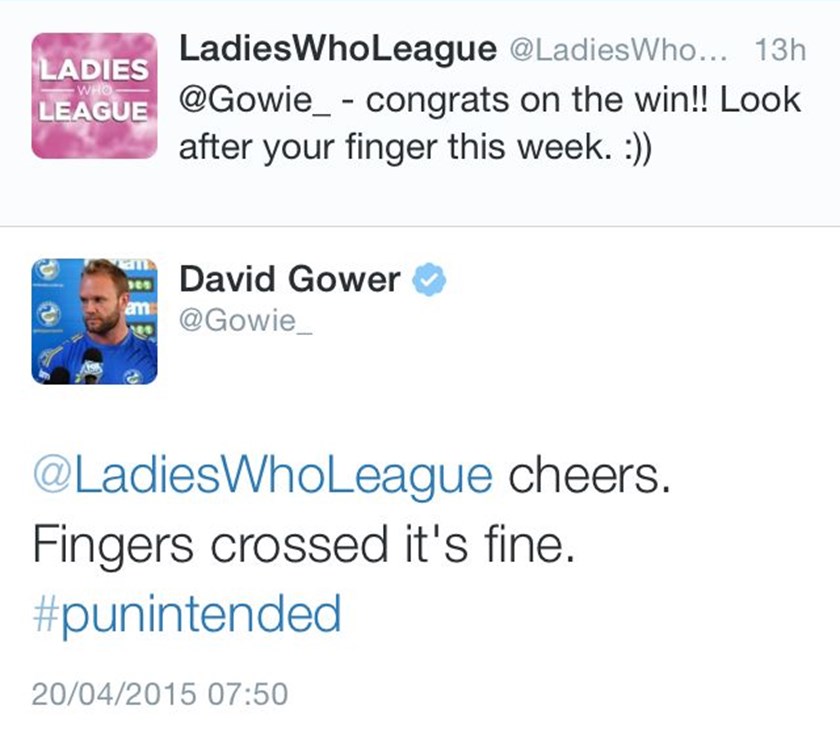 The next mention - for energy and vision - goes to our halves pairing, Chrissy Sandow and Corey Norman. Between the two of them, there was plenty of clever attacking play and the two men worked extremely well together being the catalysts for the majority of our tries scored on the weekend.

Finally, it would be remiss of me not to mention our two try hero - Nathan Peats. Since arriving at the Eels last year, Peatsy has been a revelation for our side. He always puts his body on the line and has really added another dimension to our attack. It was tremendous to see him score 2 tries on the weekend and play a major part in leading the Eels home.

Going into this weekend and looking at the NRL ladder, things look worse and what they are. There is only 4 points separating 4th and 15th with a massive 8 teams currently sitting with the Eels on 6 points. A victory is important this week. We face a tough challenge, the Broncos at home, but I know that there are plenty of Eels fans north of the border. I'm looking forward to seeing them waving at the cameras on Saturday night.

As I sign off this week, my love and best wishes to everyone in Sydney at the moment. I hope you and your families are staying dry, but most importantly, staying safe. Please take care on our roads.