The Dyldam Parramatta Eels are excited to welcome a new player to our development program, the Northern Territory’s Rodney Baird.

16-year-old Baird will join the Blue and Gold on a three-year development deal, which will see the Palmerston teenager continue training with the Northern Territory NRL, but spend time in Parramatta at least twice a year.

Parramatta Eels Coordinator of Elite Programs, Anthony Field, said the young outside back had put in an impressive performance at last year’s Australian under 15 schoolboy championships in Tamworth.

“Rodney really showcased his talent up against the best young players in the country,” Field said.

“He is an instinctive player with a high natural skill level and we believe that will evolve even further with the benefit of our development programs.”

“He has a tall, athletic and rangy build which really lends itself to outside back positions in rugby league, and we’re really excited to see his development continue.”

The programs Baird will follow with the guidance of the Eels staff mirror the development programs the Blue and Gold provide to young players throughout regional New South Wales, designed to allow young footballers to improve their skills while staying in their family environment. 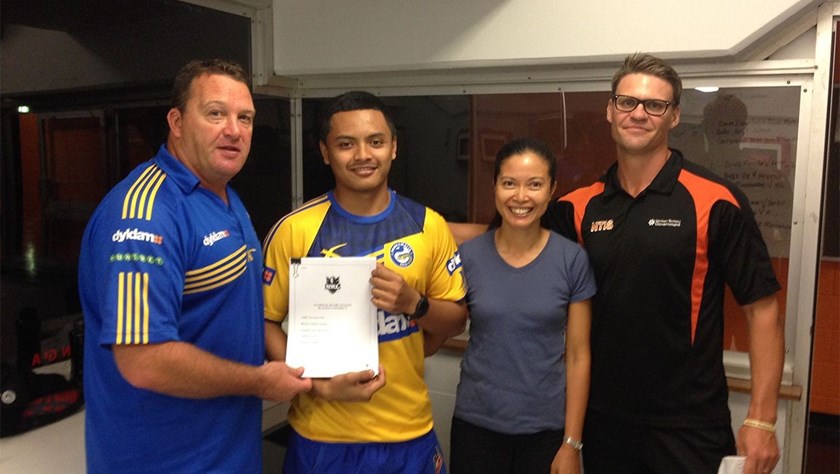 Baird is the second Territorian to sign a development contract with the Eels, joining talented young footballer William Nugraha in the Blue and Gold’s development system.

Bali-born Nugraha was one of six Northern Territory players to visit Sydney and trial for the Eels District Representative teams in late 2014, impressing Eels staff with his skill and attitude.

“It is fantastic to see young Territorians earn the opportunity to further develop their skills to match it with the best rugby league players in the country, and we look forward to seeing Rodney and Will do us proud,” said Minister for Sport and Recreation Gary Higgins.

“One of the key aims of the Government’s partnership with the Eels is to promote and hone the talents of rugby league players in the Territory through initiatives such as the Eels Academy, which develops young players in Darwin, Katherine and Alice Springs with Parramatta’s coaching and training expertise.”

“The signings are a wonderful outcome for Rodney and Will, the Eels and the Northern Territory, and again shows that we do have some very exciting prospects.”

City turn in clinical first half for Under 18s win

Matterson dances his way through the middle