The Dyldam Parramatta Eels have been defeated 35-28 as a classy Cronulla-Sutherland Sharks side closed out the third annual Johnny Mannah Cup at Pirtek Stadium on Saturday.

Sosaia Feki opened the scoring in the 7th minute, with the left winger just getting outside his man to dive over in the corner. Michael Gordon’s conversion hit the post and deflected through, to give the Sharks a 6-0 lead.

Manu Ma’u was forced from the field with a reoccurrence of his shoulder injury at around the 10 minute mark and wasn’t able to return to the game. He will have scans to determine the extent of the injury.

In the 16th minute, the Sharks worked a set play 20 metres out that saw Ricky Leutele run through untouched to score near the posts. The ensuing conversion gave the Sharks a 12-0 lead.

The Eels were lucky not to let another try in 3 minutes later, when the video referee was called on to adjudicate. A hand from Corey Norman made contact with the knocked forward ball and the decision was returned as no try.

A high ball from Luke Kelly in the 20th minute came down off a Shark hand into the arms of David Gower who shovelled it back to Ryan Morgan for the Eels first try of the afternoon. Luke Kelly converted successfully to reduce the margin to 12-6.

4 minutes later it was the Sharks that would score again with a short range try to Luke Lewis from a Michael Ennis dummy half pass. The failed conversion left the score 16-6 to the Sharks in a game where points started flowing freely.

The newly re-signed Ryan Morgan was again involved as he contested a Kelly bomb with Gordon, collecting the ball to pass to Semi Radradra who planted it down for his 22nd try of the season. The missed conversion from the sideline kept the score at 16-10 with 12 minutes to go in the half.

With 4 minutes remaining in the half, the Eels were in a good attacking position on the opposition line but the Sharks halfback, Jeff Robson, swooped on a loose ball on his own 20 metre line and sprinted to half-way. This set up an attacking opportunity that saw Jayson Bukuya score from a grounded pass. Gordon again hit the post on his conversion attempt, but this time is failed to bounce through as the Sharks took a 20-10 lead into the sheds at halftime.

The second half started with sickening head clash between Tepai Moeroa and Ricky Leutele which would see neither player take further part in the game.

A kick out on the full from the Sharks’ Wade Graham in the 43rd minute gave the Eels a great attacking opportunity but Ryan Morgan was held up in-goal early in the tackle count.

It was a stunning effort from Daniel Alvaro in the 48th minute that set Pirtek Stadium alight. Beating multiple would-be tacklers along the way, Alvaro made 25 metres and shrugged off a tackle on the line to score a try worthy of any highlight reel. The successful conversion from Kelly brought the Eels within four points with half an hour to play.

Following a decision to take the two points in front of the posts from the Sharks in the 55thminute the game teetered in the balance and it was the Eels that stepped up their attack first. A swift attacking move down the left wing in the 61st minute saw fullback Reece Robinson dive into the corner for a well-deserved try. A pinpoint conversion from Kelly tied the scores and it was anyone’s game.

The home crowd of 13,007 people raised the Pirtek Stadium roof in the 66th minute when hooker, Isaac De Gois shrugged off some lacklustre Sharks defence to score beside the posts giving Kelly the easiest of conversions and Parramatta a six point lead.

Feki scored his second try of the game with 10 minutes remaining as he sprinted down the left hand edge. A clutch Gordon conversion from the sideline, again levelled the scores at 28-28.

With the game in the balance and 4 minutes remaining in the game, Valentine Holmes slotted a low field goal from 20 metres out to give the visitors an all-important one point advantage.

The Eels were unable to respond to the challenge and in desperation to escape their end of the field a ball went to ground gifting Michael Ennis a late try and the Sharks a 35-28 victory. 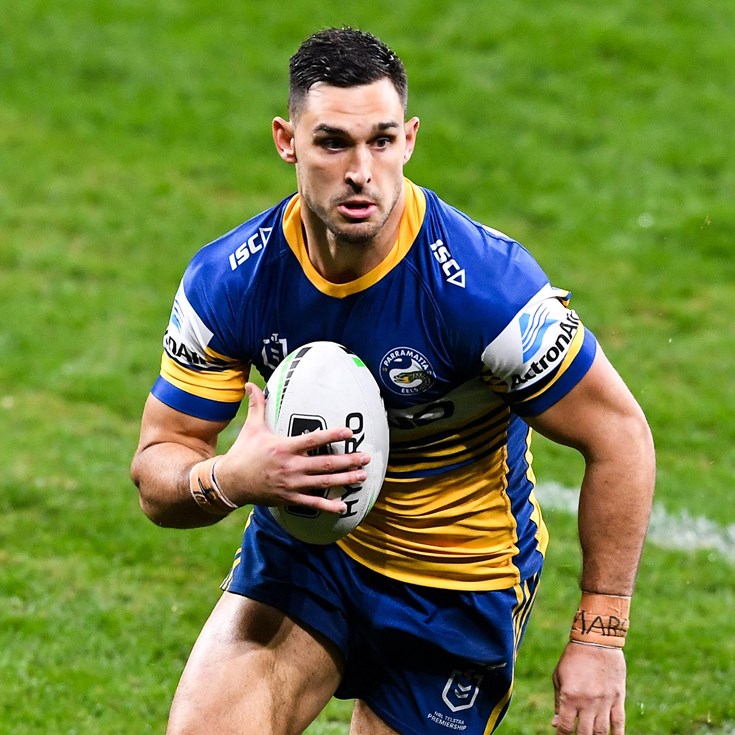