The Dyldam Parramatta Eels have defeated the St George Illawarra Dragons 30-18 in their final home game at Pirtek Stadium.

In a very emotional night for the blue and gold, the Eels looked to secure a final home win in front of a crowd of 13 553 in Parramatta’s last home game at Pirtek before it’s renovations begin.

The home side had a chance early in the game after receiving the first penalty as Peni Terepo crossed the line but couldn’t convert his efforts to points as a knock on was ruled.

Both sides were controlling the game well in the halves as the Dragons found touch 10 metres out from the try line while the Eels looked to work their way back to the other end of the field.

The second penalty of the game came in the eighth minute as the Dragons looked to mount pressure in attack. However, the attack from the Dragons was soon shut down by a strong tackle from Semi Radradra on fullback Josh Dugan. The kick on the fifth tackle then rolled dead as the Eels recovered and started a seven-tackle set.

The Eels received the next penalty as Semi Radradra broke through some space off the kick return and got the blue and gold crowd back into the game.

As errors started to become prominent in the game, it became difficult for either side to build any pressure in attack.

The Eels received another penalty off a quick play the ball as they began to piece together their attack. The blue and gold found some space on the left edge as Semi Radradra drew defenders on the wing as he threw an inside ball to Bevan French who was close by in support. French crossed for the first points of the game and with a successful conversion from Michael Gordon, the Eels led 6-0 after 18 minutes.

It was over 10 minutes before either side was able to mount enough pressure to put some points on the board.

In the 30th minute it was Kenny Edwards with a strong hit up which forced a penalty 10 metres out of his try line. Edwards then took the quick tap as he passed the Dragons defenders and crossed under the posts. Another conversion from Gordon took Parramatta’s lead out to 12-0 with 10 minutes remaining of the first half.

The Dragons were quick to respond with three back-to-back sets as while they were unable to cross the line, they forced line drop outs.

Parramatta’s defence continued to hold out the Dragons as a third drop out was forced. It all proved to be too much for the home side as Drew Hutchison broke through a tackle on the try line to cross for St George’s first try of the evening.

St George Illawarra Captain Gareth Widdop converted for the visitors as the half time buzzer sounded and the Eels led the Dragons 12-6 at the break.

Both sides had a shaky start to the second half as completions started to drop. The occasion seemed to lift the crowd as a penalty to the home side was given and the Eels were able to build pressure.

It was Eels five-eighth, Clint Gutherson, who made a small break through the Dragons defence as he passed to his flying fullback Bevan French who crossed for his second try of the night. Gordon added the extras as the Eels extended their lead to 12 points after 50 minutes of play.

Momentum continued with the home side as the Eels forced a knock on on half way, however a lack in fifth tackle options made it difficult for both sides to add points.

There was some exciting attack in the 59th minute when the Dragons made a break down the field. Mitch Rein put in a well-weighted kick for his winger Kurt Mann who was pulled down by Brad Takairangi just short of the line. The Eels were able to defuse the try opportunity but forced a repeat set for the Dragons.

The repeat set was defended well by the Eels as the Dragons forced the ball dead and Parramatta received a seven-tackle set.

The game opened up in the 63rd minute as the Eels produced what the blue and gold army came to see. A play that saw Tim Mannah offload on the half way line to Clint Gutherson as the ball then passed Kenny Edwards, Michael Gordon and Brad Takairangi on the wing who put in a kick for Bevan French as he caught it and crossed for his hat trick. It was four from four for Gordon as the Eels took a 24-6 lead with less than 15 minutes remaining.

But the Eels weren’t done there. As the Dragons forwards started to tire, the Eels continued to look dangerous in attack. Brad Takairangi’s kicking game was on again as he put a grubber in for Michael Gordon who crossed in the corner. Gordon converted his own try to put the Eels ahead 30-6 in the 70th minute.

The Dragons managed to close the gap through two late tries to Kurt Mann but had left the chance of a comeback too late.

The Eels ending their legacy at Pirtek Stadium with a 30-18 win over the St George Illawarra Dragons.

A fitting farewell for the blue and gold at the ground that has left so many memories in the hearts of the Parramatta Eels. 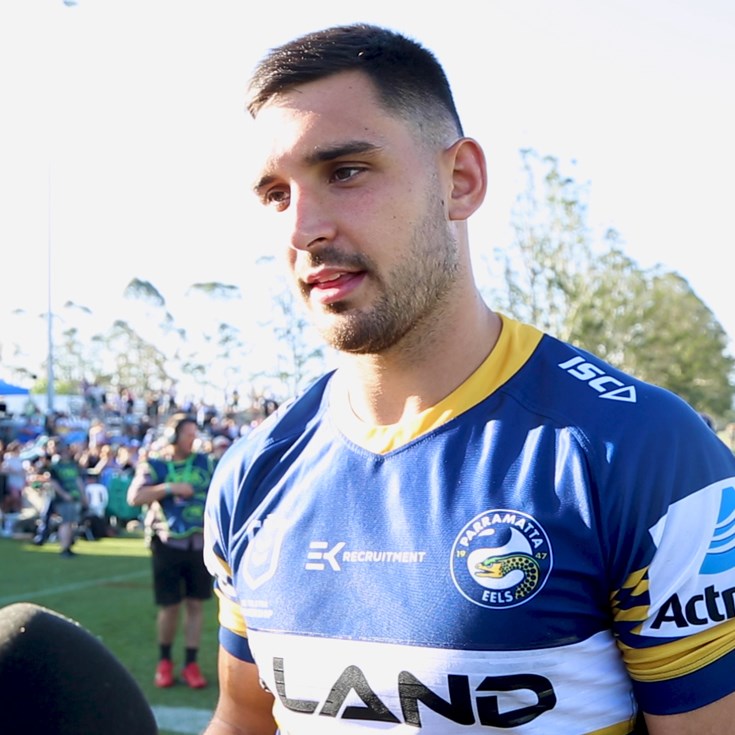 Brown still looking for ribs, but happy with his back

Eels rally late to come away with draw in Bega

Fonua levels it up late for Parramatta