Each week NEIL CADIGAN will look back on some of the most eventful games and most famous names in the club’s 70-year history and bring them back to life.

Season 1986. It’s not just the year of the Eels’ last first grade premiership that began the long wait that has endured since but it remains the greatest season in Parramatta’s 70-year history.

Everything that was on offer, the Eels took …

They were top crowd-pullers with an average 20,327 at the league’s newest and best club stadium, Parramatta Stadium. Most financial club with a profit of over $550,000 after not requiring any grant from the burgeoning leagues club.

The Eels won the midweek televised Panasonic Cup, beating Balmain 32-16 at Leichardt Oval to become the only team outside of Eastern Suburbs (now Sydney Roosters) to win the premiership and Cup in the same season.

They were minor premiers on 37 points before winning league’s only scoreless grand final, 4-2 on the back of two penalty goals to Mick Cronin. There was nothing the Eels had failed to do as a team.

And then came the enduring scenes of the retiring Cronin and skipper Ray Price doing a slow lap of honour around the Sydney Cricket Ground by themselves as thousands stayed to applaud them. Cronin, 35, had flagged that he was retiring while Price, 33, had only confirmed his intentions after full-time when he said on the presentation dais: “This is the proudest moment of my career … and the last time I play here.”

What the records books and highlights videos don’t show, and many younger fans would not realise, is just how incredible it was that respected Cronin was on the field that Sunday afternoon to finish his career in glory rather than despair.

For years the Eels had begun their season with a trial match at Cessnock, in the Hunter Valley, against the local side or a fellow Sydney outfit. In late February 1986, the opponents were Manly and Cronin stayed down after a tackle holding his right eye and was taken to hospital by ambulance.

He spent several days in hospital with a detached retina and it was feared, less than four months away from his 35th birthday, he would retire. Yet, with the encouragement of coach John Monie and his teammates, Cronin was coaxed to leave a possible return to the field open and, despite blurred vision out of the eye, confirmed he would return even though he knew he would struggle to see the ball coming from that side of his body.

The season began at the newly-built stadium against previous year’s minor premiers and grand finalists St George, with Cronin - in club blazer, tie and heavy eye-patch -kicking off to crown the Eels’ new home.

Parra, after four seasons of playing (Belmore Sports Ground) and training (Granville Park) on the road, celebrated their homecoming with a 36-6 victory. Halfback Peter Sterling, at his dominant best, earned a very rare 10 out of 10 player rating from Rugby League Week magazine (I was the judge) and later confirmed it was the best performance of his career.

Steve Sharp, the hard-working second-rower who was later to become Eels chairman, scored the first try in the top grade at the stadium in front of 26,850.

The Eels won their first 10 games before a mid-season slump (losing three out of four games) and then roaring into the finals in great form.

Cronin did not set foot on a field until July 6 – in reserve grade for the first time in his illustrious career! He played seconds again the following week, assessing whether he felt comfortable to return to the top side, before returning to steer his mates around against Penrith in round 17.

The Eels were wounded and battered going into the final round cash with fourth-placed Manly at Brookvale. After ladder leaders, South Sydney, were upset by fifth-placed Balmain 38-20 the day before, Parra knew a victory against the Sea Eagles would secure them the minor premiership and a much-needed week’s rest with the injuries they were carrying. If they won all three grades, they would leapfrog Manly to win their eighth consecutive club championships.

After record crowds at Parramatta during the season from the 26,850 opener to what is still the stadium record 27,243 against Souths, what also remains Brookvale record crowd of 27,655 turned up for the grudge match that Sunday afternoon.

Sterling was again the puppeteer and inspired his side to a 22-6 victory, with the reserve grade also securing the minor premiership (eight points clear!) and the under-23s winning.

After a week’s rest, the Eels had to face 1985 premiers Canterbury in the major semi-final after the Bulldogs had disposed of the Rabbitohs 16-2. Without the injured Steve Ella and Paul Taylor, and with Brett Kenny having played since July with a chipped bone in his ankle, the Eels won 28-6 – their biggest winning margin over Canterbury in 15 years. Kenny was outstanding, opening the scoring with a brilliant individual try.

After the Bulldogs knocked out the emerging Balmain Tigers 28-16 in the preliminary final, we were set for a dramatic season decider as the Eels chased their ‘clean sweep’ and the Warren Ryan-coached Bulldogs looked for successive premierships in their third straight grand final.

And drama was certainly delivered – if no tries.

Eels’ pencil-thin right-winger Mick Delroy was driven into oblivion over the sideline early by a late Andrew Farrar tackle, an incident from which he never recovered. He stayed on despite being concussed and stunned.

Bulldogs fullback Phil Sigsworth, in his third losing grand final against Parramatta at a third club in six seasons, became the first player sent off in a grand final since 1962 for a reflex high tackle on Kenny. To this day, Kenny believes it was not a send-off offence.

Kenny, who had scored two tries in each of the Eels’ grand final victories from 1981-83, had two tries disallowed in the first half – the first for a 50-50 double movement call and the second after diving above Sigsworth to collect a Sterling’ kick, only to be ruled by referee Mick Stone (there were no video replays in those days) to have fumbled the ball – another contentious decision.

Kenny reveals that he years later slowed the vision down ‘bunker’ like in Fox Studios, and agrees there was ‘separation’. The double movement will remain an each-way bet.

After missing two earlier kicks, Cronin – who could have landed the Eels their first premiership in his debut season of 1977 at 9-all late in the game – kicked two penalty goals to Terry Lamb’s one for Parra to lead 4-2 from the 62nd minute. Although no tries were scored, there were anxious and exciting moments – including champion winger Eric Grothe dropping a pass with a try begging in the second half.

With three minutes to go, one half of the ‘Bookends’, the competition’s biggest player Geoff Bugden, was sin-binned – leaving the Eels with 12 players. Lamb lined up a shot at goal that would have put the match into extra-time, from 35 metres out, 10 in from the right touchline, but missed.

For the rest of the match Parramatta withstood onslaught after onslaught while a man-down – right down to the last play as the Bulldogs hammered their line. Players leapt in the air in jubilation when the siren sounded – and they were 4-2 victors – then converged on Cronin and Price.

Sterling won the first ever Clive Churchill Medal, the award’s emergence only being decided five weeks earlier, although he claims fellow blond little man, fullback Taylor, was just as deserving.

He also won the Dally M Medal, was controversially beaten by Manly hooker Mal Cochrane for the Rothmans Medal, but won Rugby League Week’s player of the year award in one of his greatest seasons. 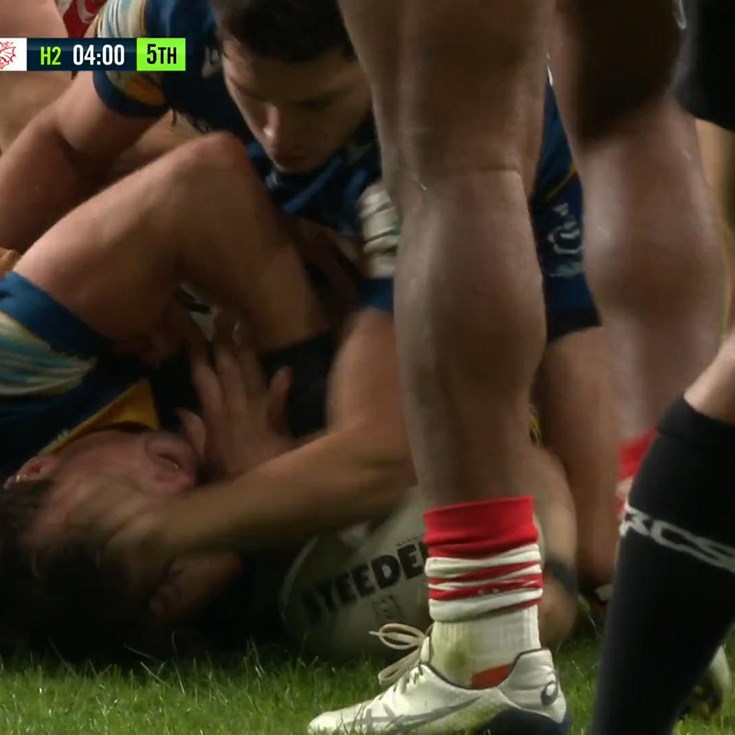