The Eels have snapped a two-game losing streak with an important 22-16 win over a sluggish South Sydney side that struggled to back up from last Sunday's bruising contest with the Storm in Perth.

‌Michael Maguire's men appeared lethargic coming off the five-day turnaround against an Eels side that did most of the damage in the first 40 minutes with three unanswered tries.

Parramatta were far from perfect and will rue a couple of missed opportunities, but their ability to stay composed in the key moments proved the difference as they claimed their sixth win of the season.

A more settled spine was meant to work in South Sydney's favour, but fullback Cody Walker had a night to forget under the high ball, the halves failed to take control while Robbie Farah and Damien Cook were well-contained around the ruck.

It was only a fortnight ago that Mitch Moses suffered a horror outing against the Bunnies in what proved to be his last game as a Tiger, but it took just six minutes for the Eels halfback to get his revenge as he held up the defence and then played short off his right hip to send Tepai Moeroa over for the opening try of the evening.

Moses continued to dictate terms with a forced line dropout and a half-break down the right edge, but it was his halves partner Clint Gutherson who laid on the next try as his innocuous grubber was fumbled by Souths fullback Cody Walker straight into the path of Beau Scott who touched down for his first four-pointer of the season.

A Gutherson penalty goal pushed the lead out to 12 points in the 27th minute before the five-eighth turned provider once more after he burst through the Rabbitohs' ruck and then found Semi Radradra in space to make it 18-0 at the break.

A physically-flat first half was quickly forgotten when Souths back-rower Angus Crichton scooped up a loose ball and then sprinted 90 metres to get his side on the board nine minutes into the second stanza.

The Rabbitohs continued to apply plenty of pressure but were either repelled by Parramatta's staunch defence or produced costly errors with the try-line begging.

Their inability to execute came back to haunt them as Eels winger Josh Hoffman put the game to bed with a remarkable try down the right sideline when it looked for all money as though he would be bundled into touch.

Hoffman then looked to have turned provider when he burst into the backfield and linked up with Will Smith who raced away to score with his first touch, only for the officials to pull up the play for a forward pass.

The Bunnies then came up with their best passage of play from the ensuing set as Alex Johnston got on the outside of his man and burnt the chasing pack to score a terrific 70-metre solo try to give the fans something to cheer about before the winger completed a consolation double seven seconds from the final whistle. 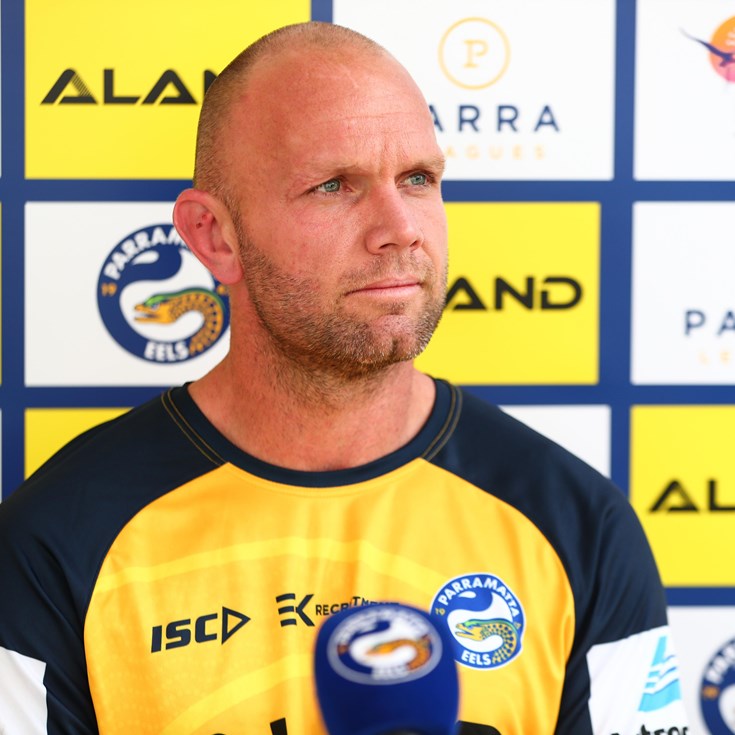 Gower say Eels aren't getting complacent ahead of Knights