Each week NEIL CADIGAN will look back on some of the most eventful games and most famous names in the club’s 70-year history and bring them back to life. Today we look at the two shock captaincy decisions that led to pair taking the Eels all the way to two grand finals each.

The both proved inspirational ‘follow me’ style leaders yet were shock choices at the time. Yet Ray Higgs and Nathan Cayless went on to captain the Parramatta Eels to two grand finals each … only for both to finish without a premiership.

Higgs joined the club in 1975 as a little known (in Sydney) stoutly-built second-rower who had hailed from Roma in Queensland but represented the Maroons and Australia from Nambour in 1974.

He was a renowned hot-headed forward who had run-ins with referees as well as opponents in his first season at Parramatta in ’75 in a season during which future club CEO Denis Fitzgerald captained the side admirably in the second half of the season and was the team’s most consistent forward.

Yet when Terry Fearnley took over as first grade coach from Norm Provan in 1976, he shocked many by electing to add a ‘c’ to Higgs’ name in the team list.

Higgs and Fitzgerald were part of the 1975 Australian side that played the World Cup in England, along with John Peard who had joined the club in ’76 after winning two grand finals with the Roosters, and John Quayle (who had suffered a shoulder injury on tour that would end his career before the end of the ’76 season). Any would have been worthy captains.

“It was a gamble in many people’s eyes but I wanted someone who was going to drive the team on the field and I thought giving Ray the job would bring out the best in him and the team,” Fearnley once told me. “He was a leader of men, naturally tough and consistent.”

Fitzgerald was deeply disappointed he was overlooked and teammates admitted they had reservations about how Higgs would adapt to the responsibilities, and whether his on-field fiery nature would be curbed. The proof was in the pudding.

In ‘76 Higgs went on to play for City Firsts, NSW and Australia for a second successive season and won the Rothmans’ Medal, the competition’s official best and fairest award, as well as Rugby League Week’s player of the year award – the second most prestigious player best player contest.

He stands in Eels’ history as the first man to lead a team to a first-grade grand final, only for Parramatta to be beaten 13-10 by Manly.

It was unfortunate that, after Higgs led the Eels to the 1977 drawn grand final against St George (9-all) and replay (lost 22-0), his three seasons at the club ended abruptly and in controversy fall-out with Fearnley.

The pair clashed over the team’s preparations for the grand final replay and Higgs also made it clear privately that he was not in favour of the proposed return to the club of one-time favourite son, Bob O’Reilly, who had been released from his contract after two years with Penrith, and who Fearnley had agreed to terms with for 1978.

The situation reached flashpoint when Fearnley gave the club an ultimatum that he or Higgs had to go. Higgs left to join Manly while, after catching wind that several at Parramatta did not welcome his return, O’Reilly changed his mind and joined the Roosters meaning the Eels were to lose two experienced international forwards.

Higgs, who struggled with knee and back injuries, played only a handful of games at Brookvale before returning to Queensland. He represented the Maroon again in 1980 (pre-Origin).

Ray Price took over the captaincy in Fearnley’s last two seasons in 1978-79 before new coach Jack Gibson elected for Steve Edge in 1981.

The Eels had turned around their fortunes from the barren years of 1987-96 by making the finals three seasons running from 1997-99, due significantly to the acquisition (in 1996) of the ‘Canterbury Four’ of Jim Dymock, Dean Pay, Jarrod McCracken and Jason Smith, the signing of Brian Smith as coach and the development of some young forwards who would become internationals in Michael Vella, Nathan Hindmarsh and Nathan Cayless.

Leading into the 2000 season, coach Smith had to make a major decision – who would replace his co-captains of two seasons, McCracken (Wests Tigers) and Pay (retired), who had moved on.

It was generally expected that Dymock and Smith would take over the shared roles but Brian Smith had other ideas and made the shock choice of Cayless who was a month short of his 21st birthday and had started in only 11 NRL games as a prop (plus 24 off the bench) over the previous two seasons (although he had represented New Zealand 10 times).

Cayless admits he was taken back when approached by Smith, feeling he hadn’t even established himself in the team and wanted to focus on overcoming that. But Smith, after consulting the Canterbury Four and his coaching staff, felt Cayless was the heir apparent to Pay’s starting front row position.

It proved a wise choice, with Cayless going on to skipper Parramatta 220 times over 11 seasons – an NRL record broken only by Melbourne’s Cameron Smith – as well as New Zealand to victory in the 2008 Centenary World Cup.

“Nathan wasn’t my first choice, I have to admit,” says Smith. “But I respected the opinions of others and it became apparent he had a heap of respect from people in the club. Nathan was taken back a bit and wasn’t sure of it, so we decided to give it a go in the trials.”

Within two seasons Cayless had led the side to their first grand final in 16 seasons, was a fixture in the Kiwi Test side and vastly respected performer despite giving away 5-10kg to most front row opponents.

It was 2011 before an Eels coach, then Steve Kearney, had to consider a replacement although it was an automatic passing of the baton to Hindmarsh. Hindmarsh was co-captain in 2010 under Daniel Anderson who wanted to relieve the workload on Cayless in his last season and groom his natural successor who had been Cayless’ deputy since 2006, filling in for only 18 games that Cayless missed in his last six seasons.

When it comes to the number of seasons as captain’s in the Eels 70 completed seasons, Cayless towers over the rest. His 11 seasons stand above Ron Lynch with five and Steve Edge, Ray Price and Peter Sterling (four seasons). 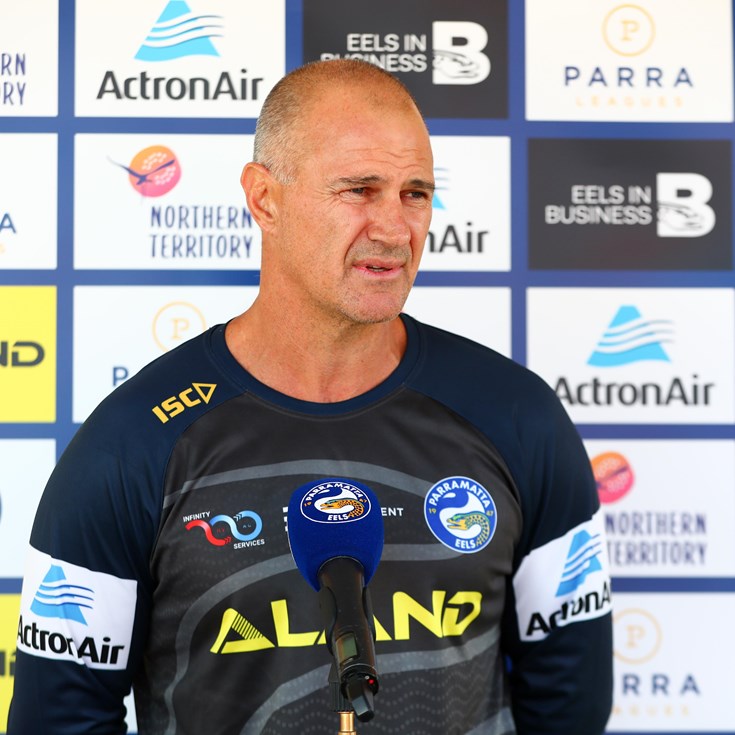 NRL Round 3: Everything you need to know about restart

Sponsored By Taylor and Scott Lawyers 4 hours ago
02:27