The Parramatta Eels have come from sixteen points down to secure a thrilling four point victory, 26-22, over the Wests Tigers at ANZ Stadium this afternoon, in Round 20 of the Holden Cup compeititon.

The Eels kicked off and were immediately on the attack, after the Wests Tigers knocked on to gift the Blue & Gold the perfect opportunity to post early points on the board.

The young Eels made the most of the opportunity, when a simple string of passes through the hands eventually found winger Greg Leleisiuao with a free run to the line, gifting the Eels an early 4-0 lead.

The next twenty minutes of play saw end to end football between the two enthusiastic sides however both teams were producing errors at crucial times and were unable to capitalise on the position.

It took a vital error, in the 24th minute of the clash, which saw the Wests Tigers strike back. Eels winger Haze Dunster was unable to claim a cross-field chip, spiling the ball in goal and Wests Tigers Oscar Tui was there to plant it on the spot to level the score.

The Wests Tigers then struck again two minutes later, after rolling down field, half Jai Doolan claimed a high bomb at the end of the set to plant it to the right of the posts for a converted try.

The Wests Tigers extended their lead by two, when they opted to take a shot at goal following a penalty from 20m out in front of the sticks.

However it was the try in the 34th minute of the clash, that saw the Wests Tigers further extend their lead when fullback Jamin Williams showed a clean pair of heels down the sideline to run 40m to score in the corner, giving the Wests Tigers a 16-4 lead.

After heading into the sheds trailing by twelve, the Blue & Gold were looking to strike first in the second stanza.

But it was Wests Tigers centre Toni Tali, who powered his way over in the 43rd minute of the clash to keep the home side’s spirits high.

The Eels struck back in the 52nd minute of the clash, when left winger Haze Dunster found himself on the end of a simple back line shift. The winger finding his way to the line to close the gap back to twelve points.

Dunster crossed for his second in the 62nd minute of the clash, this time powering his way over the line under a mountain of defenders to close the gap even further.

The Eels looked to set themselves up for a grandstand finish when centre Noel Aukafolau reached out to plant the ball over the line in the 72nd minute of the clash. But the referee was on the spot to rule a double movement and deny a try.

However, their patience paid off when utility Reed Mahoney threw a beautiful, face cut out pass to hit Denzel Tonise on the charge, who sliced through to score under the posts for a converted try, putting the Eels behind by just two.

With just minutes remaining on the clock, it took a strong individual charge from Oregon Kaufusi, who recieved the ball back on the inside from half Dean Matterson, charging over the Wests Tigers fullback to plant it for a converted try.

The try from Kaufusi securing a thrilling come from behind victory, claiming a 24-20 victory at ANZ Stadium. 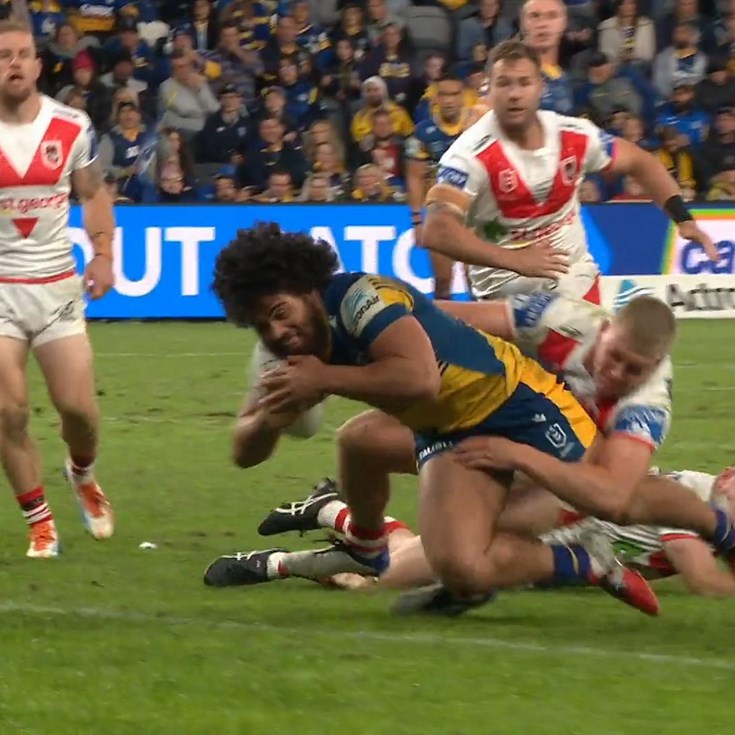