Parramatta and Penrith both kept their powder dry in a dreary dress rehearsal for their round-one showdown, the Eels prevailing with a comfortable 20-0 win at Panthers Stadium.

The fierce western Sydney rivals provided plenty of pyrotechnics in last year's season opener in which the Panthers ran down a 14-0 lead, but it was only Parramatta that fired a shot in a final pre-season hit-out for both teams.

The Eels would gladly walk away with a similar showing when the season kicks off in earnest, young five-eighth Dylan Brown impressing again alongside rocks and diamonds from scrumbase partner Mitch Moses.

Across the way NSW halfback Nathan Cleary came through his first 40 minutes since off-season ankle surgery unscathed before sitting out the second half.

Offsider and captain James Maloney meanwhile came off second best in a running battle with the officials, sin-binned for a professional foul as Penrith's penalty count spiralled well and truly past double figures.

As a result the Panthers spent much of the contest defending their own line, Parramatta trying to crack it.

Ugly early touches from the hand and boot of Moses coughed up possession, one pass travelling half the field's width into touch.

Brown on the other hand forced a line drop-out with his first attacking kick, and the Eels eventually found their groove and first points after 26 minutes.

Former Panthers winger George Jennings talked his way into the home side's carpark before kick-off and it was the beefed-up speedster who finally crossed for first points, capitalising on a Clint Gutherson basketball pass.

Penrith took until the 35th minute to threaten with anything approaching attacking football but it was the Eels again who were in next.

A glaring defensive lapse in Penrith's middle let Peni Terepo stream through from 20 metres out shortly after half-time for a 10-0 lead.

Parramatta cracked on as the Panthers' defensive load took its toll in the second stanza.

Manu Ma'u turned his hand to ball-playing to lay on two tries for recruits Shaun Lane and Maika Sivo to score down the left edge.

Ma'u did leave the field minutes later with a leg concern, while big man Junior Paulo was a late withdrawal for the Eels due to a slight hamstring strain.

Neither Paulo or Penrith's Josh Mansour, also scratched by the home side with a leg cut, are in doubt for round one.

Tyrone May was a late withdrawal from the Penrith side. Panthers CEO Brian Fletcher told Channel 9 earlier in the day that the five-eighth was the player involved in the leaked lewd video which was being investigated by the NRL Integrity Unit.

Great trial performance by the Parramatta Eels. Comfortable winners. Controlled ball well. Grew in confidence and momentum as game progressed. Put together some nice attacking. Dominated. Panthers conceded too penalties, did too much tackling, and in the end, ran out of energy. 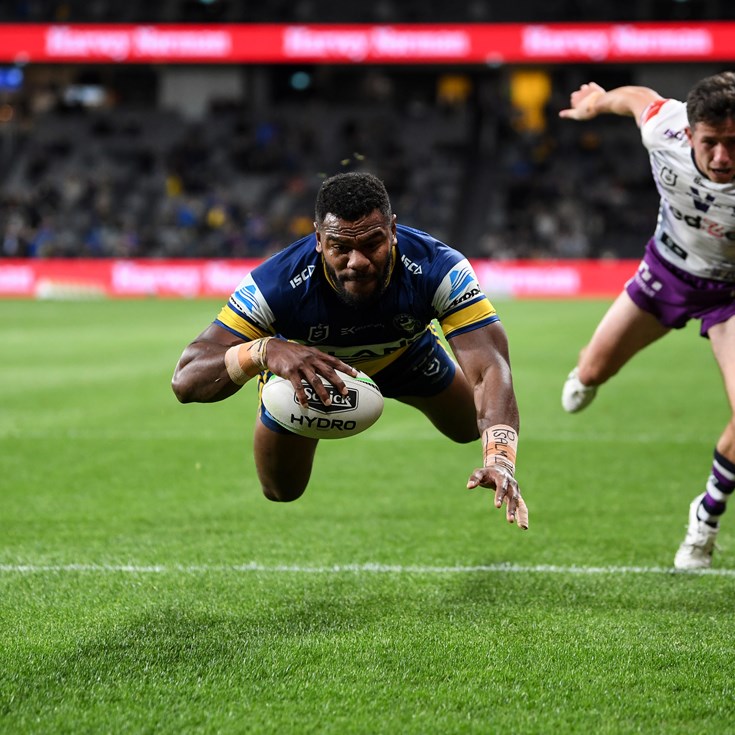