The Eels threw a welcome home party for the ages, christening Bankwest Stadium on Easter Monday with one of the club’s greatest performances to rack up a 51-6 victory against the Wests Tigers.

For two years they’ve been in the wilderness as they waited for the construction of the $300 million, 30,000-seat stadium on their spiritual land.

And on Monday afternoon, in front of 29,047 at the new venue, Brad Arthur’s men showed how happy they were to be back at their old stomping ground with a memorable ‘honey, I’m home’ type performance.

There’s something different about Bankwest Stadium. From the steep grandstands to the field - the new tunnel full of supporters and members that both teams run through on their way out on the field.

Perhaps the death stare Josh Aloiai gave an Eels fan after he yelled out “broken ankles everywhere” was an indication of just how intimidating it can be for visiting teams.

But there was nothing intimidating about it for Parramatta, who have catapulted themselves into fifth position, two points off competition pace-setters Melbourne, the Roosters, Raiders and Rabbitohs.

In a week in which Mitchell Moses and Clint Gutherson were offered three-year extensions by the club, it was fitting the pair combined to produce the first points on a historic day for the club.

It came from a quick 20-metre tap, with Gutherson offloading for Moses to run 70 metres and etch his name into the history books as the first try-scorer at the new stadium.

Moses was the best on ground against his old club, with the woes of last season feeling like a distant memory as he orchestrated a memorable win for his club.

It was a day to remember, but unfortunately Eels prop Daniel Alvaro’s involvement was a mere few seconds after he left the field concussed following the hit-up from the kick off.

Robbie Farah only lasted another nine minutes, leaving the field dazed after a heavy head knock as the Tigers defended their own line.

The first try to Moses sparked one of the most exciting 16 minutes of football in recent memory, with the Eels running in five tries to rush out to a 30-point lead in as many minutes.

Moses continued his impressive start to the match when his chip kick found a flying Brad Takairangi for a 12-0 lead.

Michael Jennings bagged the next two tries, adding to his strong case for an extension of his own, before Jaeman Salmon crossed to make it 30-0.

The Tigers grabbed a fortuitous try just before the break, with Ben Matulino latching on to a Luke Brooks grubber to send the visitors into the sheds trailing by 24.

However it did little to buck the trend, as the Eels began the second half in a similar vein of form.

Young gun Oregon Kaufusi ran a great line off Moses to add his name to the scorer’s sheet, before Reed Mahoney cleaned up the scraps from a bomb to grab his side’s seventh try of the afternoon.

There was still a quarter of the match to play and the Eels showed no signs of slowing down, with Fijian winger Maika Sivo crossing out wide for a 46-6 lead.

The Eels notched up the half century with just 67 minutes up on the clock, as Shaun Lane continued to mount a claim as one of the most underrated players in the competition when he ran off Salmon for Parramatta’s ninth try.

The script needed a fitting ending, and it got it when Moses slotted a field goal from 30m out to finish as the first player to score a try, goal and field goal at the new venue. 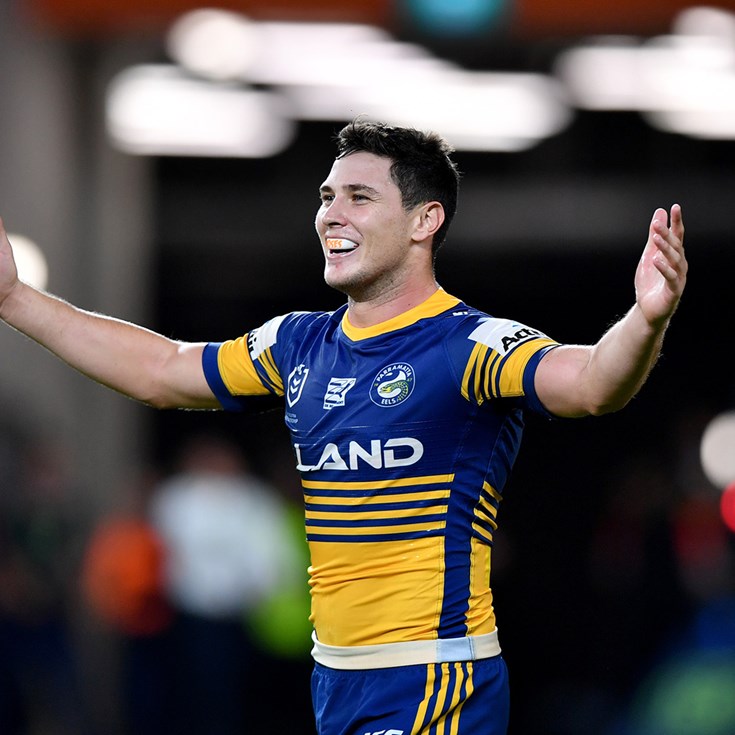