Mitchell Moses is headed towards September redemption after engineering Parramatta’s commanding 36-12 win over the Titans on the Gold Coast on Friday night.

The victory did little more than solidify the Eels’ position in sixth spot on the Telstra Premiership ladder but is another important step in Moses burying the demons of a 2017 finals campaign in which the fourth-placed Eels fell out of contention with consecutive losses.

The lopsided nature of the scoreline took the Titans’ tally to 206 points conceded in five weeks in what is now a club record eight-game losing streak yet for 40 minutes there was the prospect of an upset.

Both of the Eels first-half tries came from kicks but when Gold Coast gave away two penalties inside the Eels 10-metre line and kicked out on the full once in the opening five minutes of the second half, Moses came into his own.

Credited with just two official try assists, Moses was at the heart of every Eels attacking raid.

His right boot led directly to the first three Parramatta tries and he created both opportunities that led to Blake’s double in the space of five minutes midway through the second half.

He even piloted six conversions from as many attempts and slotted in for Clint Gutherson at fullback when the Eels skipper left the field nine minutes from full-time.

Up 12-6 at the break, the Eels advantage could have been far greater.

Denied twice by the video referee – the first of which came just 65 seconds into the contest – Gutherson bombed another five minutes from half-time in comical fashion.

Attacking the Titans right side from a scrum win, winger Brad Takairangi flung the ball back infield before going into touch, the ball bouncing off Brian Kelly arms and into the head of Gutherson as he stood a metre inside the Titans in-goal, the ball rebounding off his noggin and into touch.

After errors and penalties punctuated the opening 10 minutes it was former Titan Takairangi, who sparked the first try of the game.

An offload inside his own 10-metre line kick-started a 90 metre set for the visitors that culminated in Takairangi batting back a Moses kick for Daniel Alvaro to regather and score - the prop’s first try in two years which also came against Gold Coast.

Parramatta very nearly went back-to-back if not for Blake knocking on his own pass, their second coming in simple fashion after 23 minutes.

Showing far greater resolve in defence than they have for the past month, Gold Coast defended a set inside their own territory but left an acre of space for Moses to grubber into on the last tackle, back-rower Manu Ma’u beating Kelly to the ball.

An enterprising style of Titans footy failed to breach the Eels defence until a fortunate bounce saw them across 12 minutes from half-time, a Ryley Jacks grubber rebounding off the foot of Parramatta hooker Reed Mahoney and into the arms of Kelly who twisted past Blake to score.

It took less than three minutes for the Eels to be denied a third time, Maiko Sivo penalised for contact on opposite Jesse Arthars as he collected a Moses grubber for what would have been his 17th try of the season.

Kelly sells the dummy and beats his opposite centre

A complete lack of communication gave Shaun Lane a free shot at a Moses bomb which he converted into a try beside the posts in the 46th minute. It was also the Eels five-eighth who delivered the killer blow 26 minutes from full-time.

Drifting across the face of the Gold Coast defence, Moses drew two defenders before offloading in the tackle to Ma’u who in turn found the long-striding Blake, who galloped clear of the chasing Titans to score under the posts.

The trio were at it again five minutes later, Moses putting Ma’u through a hole before a flick pass gave Blake a 10 metre run to the line for his second in quick succession with a rampaging Marata Niukore rounding out a dominant second half with a try 10 minutes from full-time.

Arthars scored a consolation try in the 75th minute for the home side, anchored in 16th spot with just four wins from 21 games. 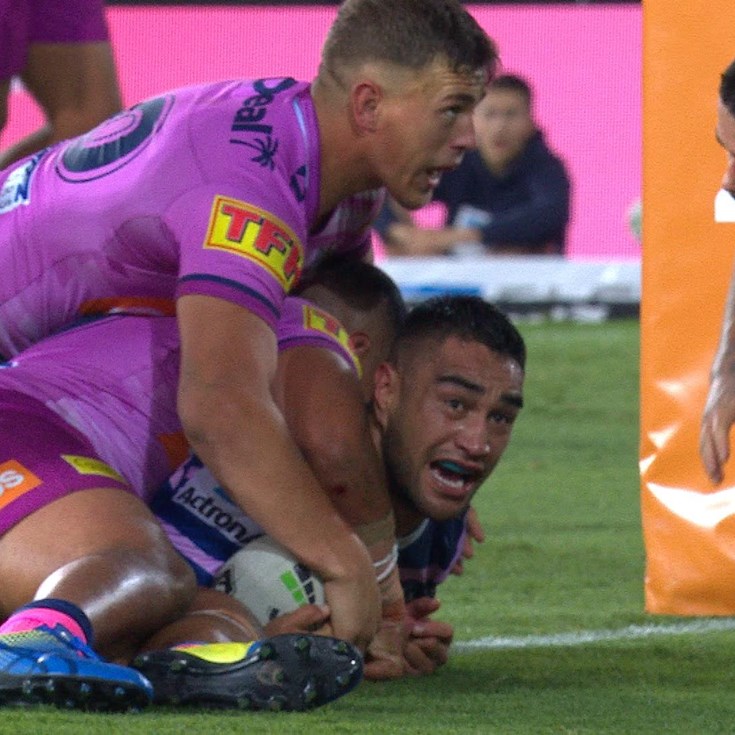 Blake scores his first try as an Eel