Parramatta flexed their premiership muscle with a thumping 46-6 victory over Gold Coast on Sunday night, but the win may come at a cost with hooker Reed Mahoney suffering an ankle injury.

Eels halves Mitchell Moses and Dylan Brown (two) provided the razzle dazzle with impressive tries, but the win was built by their powerful forward pack that simply monstered the Titans into submission and forced errors at crucial times.

Mahoney limped off just before half-time with an ankle injury, forcing fullback Clint Gutherson to play dummy half in attack as the Eels dominated the second half to run out seven tries to one victors.

Parramatta simply massacred the Titans all over the park with double the amount of possession (67 per cent to 33), completing 40 of 47 sets with 56 tackle breaks and seven line breaks.

It was another night of coach-killing moments for the Titans, reminiscent of their dreaded 2019 wooden spoon season when they'd give away silly penalties or drop the ball coming out of their own end.

By the end of the game the Titans had amassed 11 errors, completed just 14 of 24 sets, conceded 13 penalties and racked up 56 missed tackles.

While the Eels came up with their own mistakes, they were rarely made to pay for their errors.

The Titans on the other hand paid dearly for every lapse in concentration.

The tipping point came in the 56th minute. The Titans looked to gain confidence after Sivo was held up over the line by an incredible try-saver by Phil Sami in the 54th minute and the team then defended four tackles on their own line to hold out the Eels.

But Titans prop Jarrod Wallace dropped the ball cold on just the third tackle coming off his own 10-metre line and just a few plays later five-eighth Dylan Brown stepped his way through the defence to break the Titans' spirits.

Moses breaks into space and goes all the way

That breakthrough became three tries in eight minutes as Kane Evans and Sivo both crossed, before late tries to Peni Terepo and another for Brown completed the rout.

Parramatta started the game sharply, their ball movement even from deep in their own half causing all sorts of headaches for the Titans defensive line.

It didn't take the Eels long to open up the Titans, with Nathan Brown's quick pass on his own 20-metre line creating space before Mitchell Moses received the ball and sprinted 70m to score in the corner.

Within a blink of the eye the lead was extended further as the Eels marched up the field off the re-start, courtesy of a stripping penalty, for hooker Reed Mahoney to score from close range to make it 12-0 after nine minutes.

Dylan Brown steps his way through the line

It was a case of anything that could go wrong did go wrong for the Titans in the first half.

First they lost skipper Kevin Proctor in the warm up when he failed a fitness test on his hamstring.

Even when they put points on the board, with a try to Dale Copley, it came at a significant cost as the winger was immediately assisted from the field.

Copley had copped knees to his ribs from Eels lock Brown after he had scored, prompting an extra penalty shot at goal for the Titans which they converted to reduce the deficit to 12-6 after 15 minutes.

The winger's departure, however, sparked a huge backline shuffle as centre Brian Kelly was already off under the HIA rule. Anthony Don switched from the right to left wing, Kallum Watkins moved to the wing, Bryce Cartwright to centre and Nathan Peats went into the second row.

Then on the half hour five-eighth Tyrone Roberts was helped off the field with an ankle injury, although Kelly was able to return back to centre after passing his HIA assessment and Tyrone Peachey shifted into five-eighth while Roberts returned in the second half.

Amid all the confusion the Eels were unable to capitalise on their dominance and only added a penalty goal for a 14-6 lead at the break. 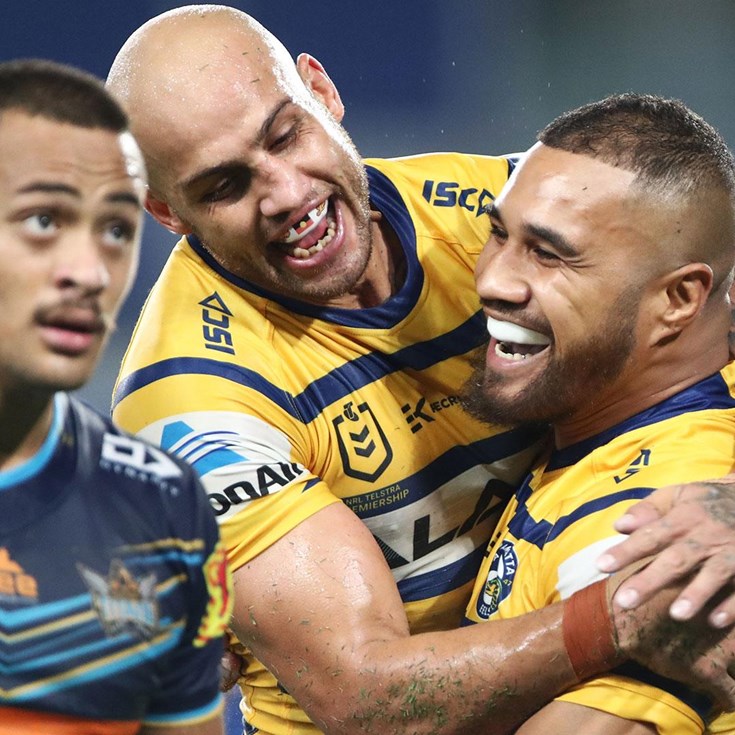 Evans monsters his way to a try

Copley gets the first for the Titans