Former Panther Waqa Blake came back to haunt his old side and spark the Eels to a 16-10 win in the Battle of the West at Bankwest Stadium.

A barnstorming effort from Blake in the 62nd minute started a three-try onslaught in a five-minute period after the Eels had trailed 10-0 with a quarter of the match remaining.

The Fijian international broke the line again shortly to lay on another for skipper Clint Gutherson to level the scores and bring the 507 fans allowed into the ground back to life after a sluggish opening 60 minutes.

"Waqa turned the game and I was really happy for him up against his old club," Eels coach Brad Arthur said.

"He works extremely hard, it was a nice fend and nice try. It gave us a touch more energy and confidence on the back of it."

The remarkable change in momentum, further aided by a tremendous run from Nathan Brown on the previous play, brought about Parramatta's third through Ryan Matterson from a Mitchell Moses kick which bounced horribly for Panthers fullback Caleb Aekins.

The Panthers had a chance to send the game into golden point on the full-time siren but the Eels held on to secure their best start to a campaign since the club's last premiership season in 1986.

Earlier, the Panthers lost in-form forward Kurt Capewell two minutes into the clash with a suspected medial ligament injury as both sides were denied tries in the opening stages.

Eels winger Blake Ferguson was ruled to have pushed Stephen Crichton in the lead-up to Matterson touching down and then it was Dean Whare's turn to put a shove on Dylan Brown which cost Penrith a try.

Panthers coach Ivan Cleary was disappointed at the no-try ruling for Whare following the match.

"We've opened a can of worms if that's not a try," Cleary said. "[But] it wasn't the winning or losing of the game."

Reagan Campbell-Gillard made his presence felt early against his former club with a monster hit on James Fisher-Harris but the Panthers repelled any further shots from the home side to deliver a 10-0 lead at half-time.

Momentum carried Brian To'o over the line after a loose pass from Aekins popped up for the Panthers winger to score out wide.

Cleary, who was returning from a two-week NRL suspension for his role in a breach of social distancing protocols in April, was forced to attempt the conversion with the TikTok song that landed him in trouble playing beforehand.

The sideline miss was his only blemish in an otherwise strong display.

"I thought like all our boys he tried hard," Cleary said of Nathan's return.

"He came up with some good plays and will only be good for the run."

The Panthers knocked back the chance for two points in front with four minutes remaining in the first period and were rewarded the following set with Cleary chiming in on the left edge to help send Josh Mansour over.

In a concern for the Eels, Kane Evans was placed on report for an alleged 'chicken wing' effort on Liam Martin. The match review committee will on Saturday decide whether a charge will eventuate. 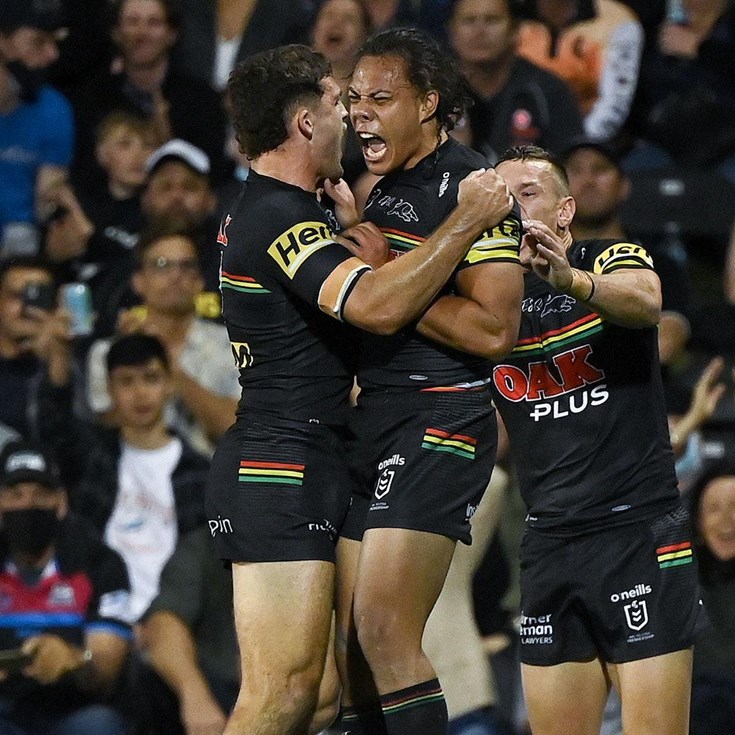