Parramatta have not celebrated milestones well in the past and went all out to ensure a long-awaited century for captain Clint Gutherson was remembered for the right reasons.

The one-time injury-ravaged Sea Eagle, who earned the ire of the blue and gold army in his early days after some underwhelming stints on the wing, is now a popular and match-winning club captain.

"It was important we showed our captain what we think of him," coach Brad Arthur said after Friday night's 42-2 win over North Queensland.

"The boys were focused around it. We probably haven't been good enough at milestones in the past. It's pretty important. At captain's run there was a bit of a presentation to Gutho and a highlights package. It's important for those sort of people."

Gutherson played just five games in three seasons at Manly, a stint that included one season-ending ACL injury – an injury that was repeated in 2017 at Parramatta. He brought up his 100th game in his eighth season of first grade.

"It's taken me a long time but just happy to knock it over; 100 games is pretty special," he said.

"Especially with a few injuries along the way. It means a lot to me and my family and everyone who's been along for the journey. I had a few of my mates here who have been there from my debut as well, they made the trip out from the beaches which was special."

Gutherson joked that he was "hated when I first came here, on the wing and playing pretty bad footy."

He paid tribute to Arthur and the rest of the coaching staff for their help in getting through the tough times.

"[Arthur] gave me a chance and I wanted to repay him. I've said it before, I stayed because of Brad and he deserves what we're going through at the moment," he said.

There were plenty of times Gutherson thought he'd never make it to 100 games.

"I think I played four or five games over four years," he said.

"You've just got to put up with it and go along with it, I'm lucky I've got a good bunch of mates and good family; 100 games feels like 300 for me.

"I had some great role models growing up playing at Manly. They went through it a lot as well with Snake [Brett Stewart], he only played a few games over a few years [at one point] and when I did my knee early he got around me and that's what got me through."

Gutherson in everything, Sivo has a double

Gutherson welcomed the chance to play in front of a crowd again, with over 7000 in Bankwest Stadium – the first time since round one more than a couple of hundred have been in the venue.

They were in fine voice through the commanding victory against the Cowboys, sending up a rousing "SI-VO!  SI-VO!" chant for four-try hero Maika Sivo.

Asked whether that could ever turn into a "Gutho" chant instead, the fullback only smiled.

"There were two people when I was goal kicking screaming it out," he laughed.

"That made me smile so that was good but if Maika keeps scoring he can get it all, I don't mind, it's a team game and when we're winning it's good, hopefully he keeps on scoring four tries." 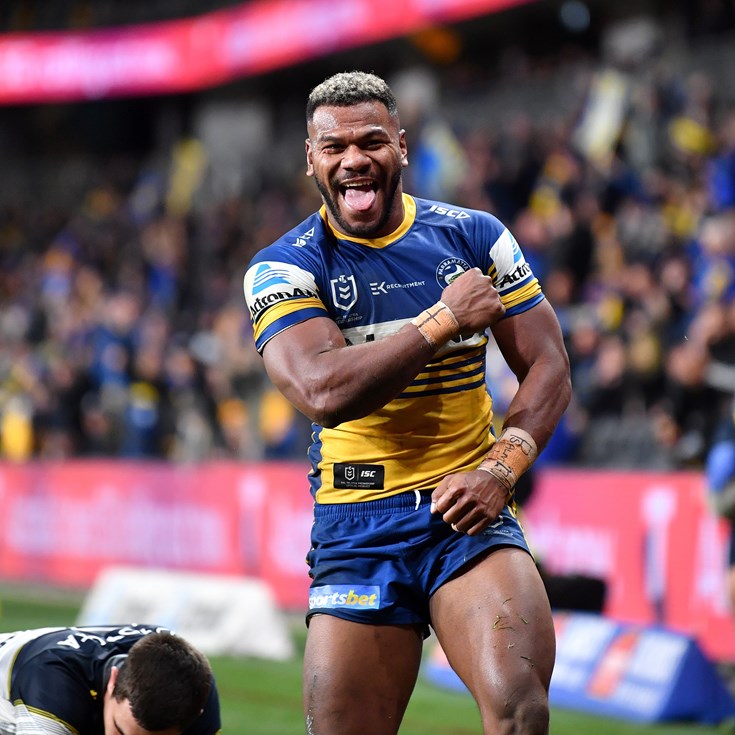 RCG can see blue, but focus remains on the finals