It was a case of 'no Moses, no worries' for Parramatta on Friday night as skipper Clint Gutherson produced the near-perfect game in his 100th NRL appearance to orchestrate a 42-4 win over the Cowboys at Bankwest Stadium.

Blockbusting winger Maika Sivo had a field day against some almost non-existent right edge defence, becoming the first Eel since Semi Radradra to score four tries in a game.

Former Dragon Jai Field had an impressive club debut, using his searing pace to score a try and playing second fiddle to young five-eighth Dylan Brown who had three try assists of his own in a commanding performance belying his relative inexperience.

But it was Gutherson's night, with the formerly injury-prone fullback racking up three try assists, more than 250 metres, seven busts and booting seven goals from eight attempts – most of those from the sideline.

The three playmakers more than covered for the loss of senior half Mitch Moses to a short term calf complaint against a Cowboys team that simply had no answers.

The first 10 minutes of the match was a perfect summation of why each team is where they currently are on the ladder.

With the aid of a good defensive set followed by some six-again calls the Cowboys camped on the Eels line, eventually getting four consecutive sets but were turned away comfortably with the Eels romping up the other end to score with virtually their first attacking chance.

It came via a beautiful Gutherson cut-out past some ragged right-side North Queensland defence for Michael Jennings to cross almost untouched in the 11th minute.

The 100-gamer had a carbon copy try assist for Maika Sivo 10 minutes later, and Waqa Blake became the third ex-Panther to score in the space of 17 minutes when he marked a Dylan Brown bomb to score next to the posts.

“He's going well, he just had to work on some of his timing and depth there and put himself in a better position to give some of those guys inside him an opportunity to make those passes to him,” Arthur said.

"He got a couple of nice passes of Gutho tonight, and Laney's doing a good job of keeping defences interested as well."

The Eels got a bit sloppy through the middle once their starting pack was interchanged and with a bit more momentum, the Cowboys finally got on the ball through a lovely Scott Drinkwater flat ball at the line to Tom Opacic right on half time.

Any thoughts of a comeback were quickly snuffed out as new Eels halfback Field streaked over in the corner after receiving a Blake bat-back in their first set of the second half.

A Gutherson line break set up another attacking chance and the skipper fired yet another perfect cut-out for Sivo's second and the blockbusting winger sealed his hat-trick with Brown delivering the perfect long ball for his third in the 62nd minute.

The ragged Cowboys compounded their woes with repeated errors coming out of their own end and it seemed almost inevitable when Sivo crossed for his fourth, on the end of an overlap and a nice tap-on from Brad Takairangi.

A Gutherson penalty goal to wind down the clock in the final moments sealed the 42-4 win that moves the Eels, at least temporarily, two points clear at the top of the Telstra Premiership ladder with the Cowboys slipping further from the top eight.

Cowboys coach Paul Green lamented the team's inability to string two good halves together and called it "one step forwards and two steps backwards" after last week's dominant first half against the Knights.

The right edge defensive issues boiled down to a lack of trust and confidence, he added.

"It took them well into that second half before they started getting it right," he said.

"Some of those guys are learning in the NRL when the game comes your way you have to be ready to do what you have to do.

"We missed our chance down there in the first half and didn't learn our lesson at half time. There's a lack of trust and when something goes against them there's a bit of a lack of confidence." 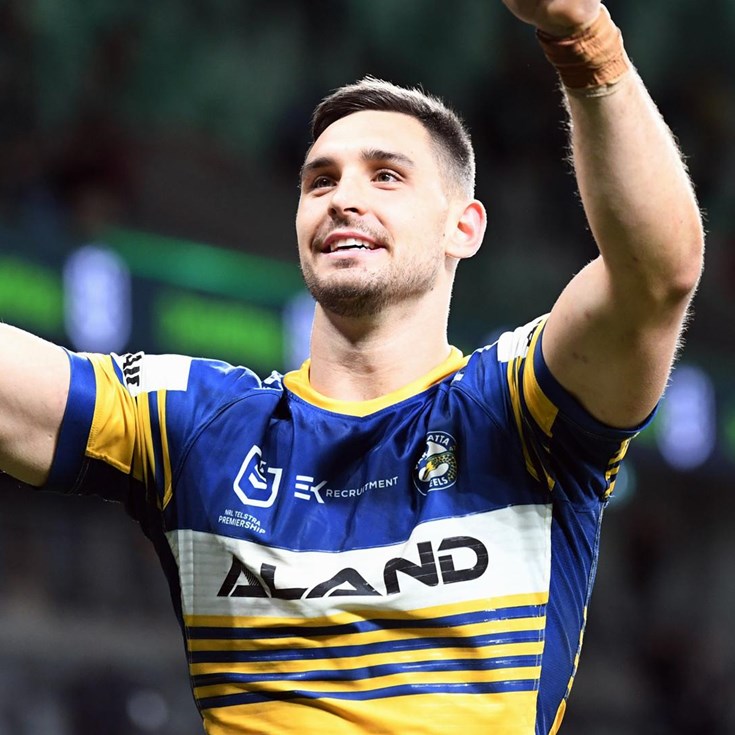