A fast start proved enough for a largely disappointing Parramatta side to score a 18-16 win over a valiant Canterbury at ANZ Stadium on Sunday.

Eels coach Brad Arthur will have plenty to talk to his team about this week, but in the end they did enough to remain one point behind competition leaders Penrith.

Trailing 18-0, Canterbury responded with three unanswered tries of their own, including a beauty to Jake Averillo, and had plenty of chances.

In the end, Mitchell Moses's perfect goal-kicking performance and Aiden Tolman's decision to forgo a certain two points that would have levelled the scores deep into the second half gave Parramatta the edge.

Arthur's provisionally second-placed team defended their line stoutly when it counted but lacked their usual punch in attack.

Still, the win provided them with a four-point buffer over the Roosters in fourth position, while Canterbury missed the chance to climb off the bottom of the ladder.

Positively for the Bulldogs, halves Kieran Foran and Lachlan Lewis combined nicely in patches and ex-Dragons centre Tim Lafai emerged unscathed in his first match for the club since 2015.

In somewhat of a role reversal, Eels halfback Moses stormed onto a deft two-handed offload from prop Junior Paulo to open the scoring in the sixth minute.

Canterbury looked to have quickly struck back as Foran fired the ball to winger Marcelo Montoya, but a penalty was given for an obstruction by second-rower Raymond Faitala-Mariner.

Foran remonstrated with referee Chris Sutton after the decision but the Bulldogs opted not to use their captain's challenge.

Dallin Watene-Zelezniak then provided social media meme fodder by comically facing the wrong way as he played the ball, conceding another penalty.

Parramatta capitalised on the blunder, shifting left off the ensuing tap restart and breaking clear via Michael Jennings, who laid on a try for supporting fullback Clint Gutherson.

The captain completed his double in the 28th minute, flying through the middle to ground a brilliant in-field Moses kick that caught out Nick Meaney after he overcommitted to his left.

The Bulldogs kept themselves in the contest as Foran played short to Faitala-Mariner and he powered over to claim his fourth try in five games.

Canterbury chanced their arm with some expansive play following the break. It paid dividends as Averillo ensured his place on highlight reels with a magical airborne finish.

The resurgence continued in the 52nd minute when Foran linked with Lewis and he threw a cut-out to 50th-gamer Montoya, who wasn't to be denied the second time around.

Tolman's decision to pass up an easy shot at goal was one the Bulldog would rue. 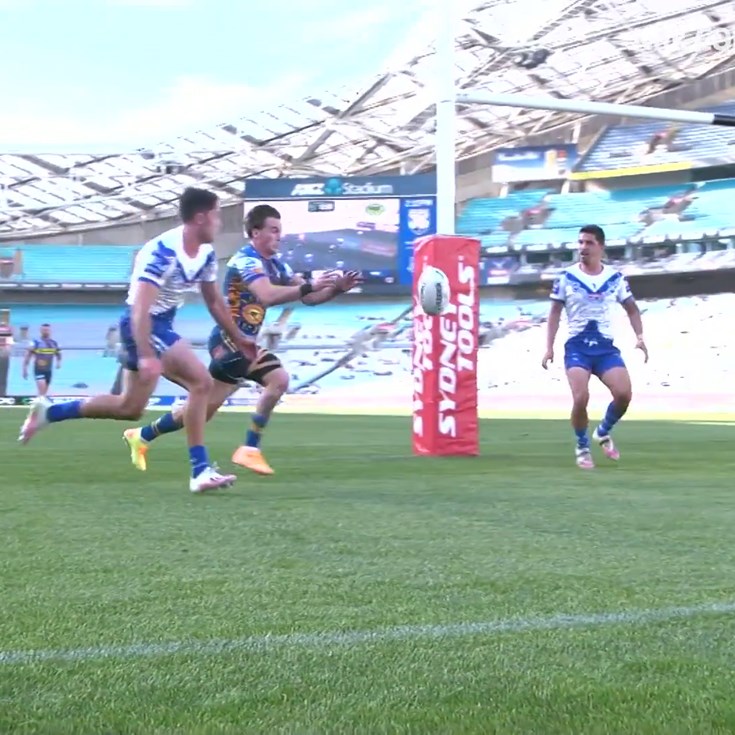 Paulo offloads in traffic for Moses to score