Melbourne were held scoreless for the first time in six years in a 14-0 loss to Parramatta at Bankwest Stadium on Thursday night and will be desperate for some troops to return next week with up to five more players potentially set for stints on the sidelines.

Of most concern is hooker Brandon Smith, who left the field late clutching his jaw, while five-eighth Ryley Jacks also went down with a hip injury.

The Storm could well be the first team to fall foul of a crusher tackle crackdown, with debutant half Cooper Johns and bench forward Albert Vete placed on report in the first half.

Even a grade one charge would mean a suspension under the new guidelines while the club could also be without Nelson Asofa-Solomona, who was sin-binned for a shoulder hit to the face of Marata Niukore and faces a nervous wait for the match review committee charge sheet.

The Eels bounced back well from last week's loss to the Dragons, coughing up plenty of ball with adventurous play but defending brilliantly and finding two tries in a largely dominant display. Back-rower Ryan Matterson was heavily involved in his return from injury.

"We knew we had to defend well and it's been a focus for us for a while now," Eels coach Brad Arthur said.

"We haven't done a great deal of work at training with the ball and I reckon it's showing a bit but we have to make sure we can defend long periods and trust our systems and we're getting better at it."

"We went close to jagging a try early and then we had two or three chances and probably didn't get the timing quite right," Bellamy said. "Parramatta tackled really well without a doubt. I thought our guys did too."

The Eels were frantic early, conceding possession several times with some wayward passes and handing the Storm some attacking chances but did well to hold their line as the absence of Melbourne's playmaking stars proved crucial.

An astute Gutherson challenge when he was originally pinged for taking Papenhuyzen's legs out under a kick found an escort from Johns and allowed Moses to open the scoring with a penalty goal after 15 minutes.

An offside penalty received in the next set carried the Eels back up-field for Ryan Matterson to produce a pearler of an offload for Waqa Blake to nab the first try of the match.

A pair of crusher penalties against Johns and Vete in the 32nd minute again moved play into the Storm's end before an early set error from Josh Addo-Carr allowed Maika Sivo to race in from a well-executed scrum play and a 12-0 half-time lead.

The Storm lost Jacks early in the second half with Nicho Hynes coming into the halves, while Asofa-Solomona was sin-binned soon after that. However the Eels weren't able to punish the one-man disadvantage, adding just a penalty goal during the 10 minutes.

Sivo dives over from the scrum

The Eels went close to further points with Dylan Brown producing a brilliant left side play but the Storm were able to force the ball from Michael Jennings' grasp in the grounding, while a 90-metre move from their own end was brought undone by a desperate Papenhuyzen try-saver.

Kenny Bromwich was denied what would have been the Storm's first points by a forward pass call and Papenhuyzen had the ball stripped as he looked to score from a Hynes kick inside the final three minutes.

The Eels conceded a dropout from that play but again held their line firm against a stern examination to inflict the Storm's first loss to nil since the Cowboys beat them 22-0 in round 12, 2014.

It was just the sixth time in Melbourne's 23-year history they have been held scoreless and the return of Cameron Smith, Cameron Munster and Jahrome Hughes can't come quick enough.

The Eels draw level with the Storm on 24 competition points but remain in third on differential. 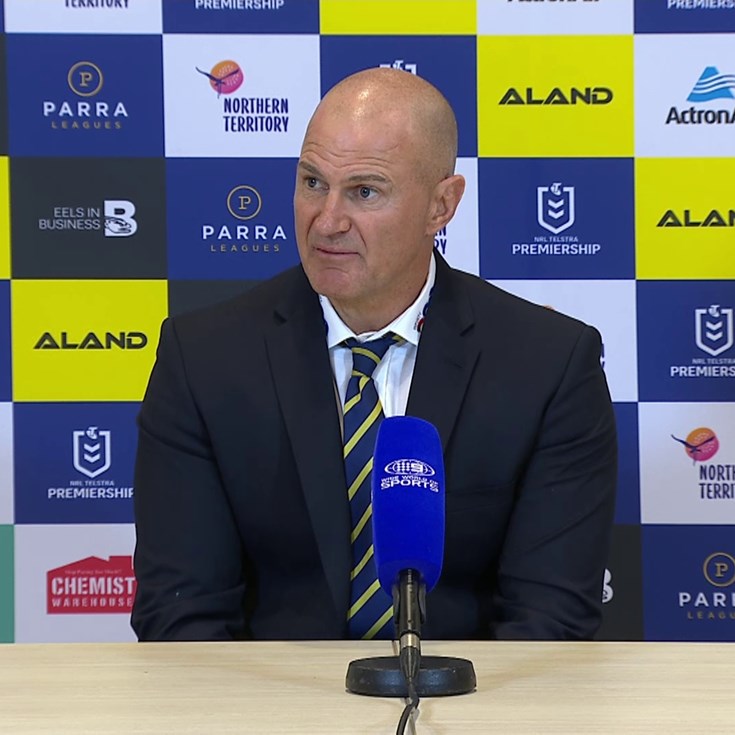