The Parramatta Eels still need a couple of weeks to polish things up before they can again be called premiership contenders, according to coach Brad Arthur.

He breathed a sigh of relief when his side managed to hold off tricky opponents in the Warriors 24-18 at Central Coast Stadium on Sunday.

The Warriors were after three wins in a row and had secured four from their previous five games.

But the Eels shot out to a 16-0 lead and made Todd Payten's men play catch-up football.

And the Warriors came close reducing the margin to just four points twice - at half-time (16-12) and again at the 67th minute mark (22-18) after a Hayze Perham try. A Mitch Moses penalty stretched the lead to six and that's where it stayed.

It was a much-needed win – Arthur admitting as such in his post-match comments. However, he was also honest enough to know the Eels haven't shown enough, in the past month at least, that they can truly threaten the Panthers, the Storm, or the Roosters.

"We've still got a couple of weeks to get it right," Arthur said.

"You couldn't say that [Eels are premiership contenders] on the back of that performance right now, but the thing is we've got a really tough opposition there next week [Panthers] to challenge ourselves on. We're up for the challenge.

"I was happy to get the two points. It was extremely important in the context of where we sit.

"There's some stuff we can better up, or at least tidy up, but at least we're giving ourselves a chance."

The Eels are now in outright third, passing the Roosters, and they did it while losing their livewire hooker Reed Mahoney for most of the second with a suspected A-C joint injury in his left shoulder.

"He needs to have scans tomorrow," Arthur said. "He couldn't pass left or right so we'll have to see."

The Eels have a short turnaround before facing the Panthers on Friday night.

"We have Stoney [Ray Stone]. He's doing a good job. He's trained there, done a fair bit of work there," Arthur said of his No.14 who filled in at dummy-half against the Warriors.

"It's probably fortunate that we got those two weeks where we took Reedy off and gave Stoney some game time.

"We've just got to keep it nice and simple."

It was a gutsy win by the Eels and would have helped heal some of the wound left open after the 38-0 thumping the Rabbitohs gave them a week ago.

The contest had a little of everything – a sin-binning, a few injuries, several no-try calls but all intermingled with Blake Ferguson scoring his first try of the year while Chanel Harris-Tavita did the same.

Maika Sivo opened the scoring in the fourth minute with his 13th of the season after a nice cut-out ball from Shaun Lane opened the door for him.

The Warriors then let in two tries while Jazz Tevaga was in the sin-bin for throwing a punch at Nathan Brown, and both were beauties.

A Clint Gutherson break up the middle was followed by a kick-through from the crafty Eels fullback. Jai Field went after it at speed to give his side a 10-0 lead.

Harris-Tavita scores a try you have to see to believe

Then Ferguson broke his duck with a 25 metre dash, followed by another Moses conversion, and it was 16-0.

Ferguson scored 10 tries in his 19 games last year but it's taken 17 rounds to get one this year.

But both four-pointers paled into comparison with what the Warriors and Harris-Tavita produced for the next two quick-fire four-pointers. Their 34th and 36th minute efforts were two of the best tries of season 2020.

The ball passed through nine sets of hands, included two kicks by Harris-Tavita – who started everything rolling with his bomb to the left corner – and Kodi Nikorima before the Warriors No.7 scored their first.

Then the 21-year-old 'everywhere-man' was at it again off the back of a 65-metre run from Roger Tuivasa-Sheck. His pass came off the foot of Nikorima which Harris-Tavita scooped up for his second.  His 12-point spree made it 16-12 at halftime.

It was a grinding affair for the opening 20 minutes of the second half. But things livened up when the two sides traded tries to Waqa Blake and then Perham.

Peta Hiku looked like he was going to be the Warriors saviour gunning for the corner before a wonderful piece of defence from Michael Jennings forced Hiku over the sideline near the corner post sealed the deal for the Eels. 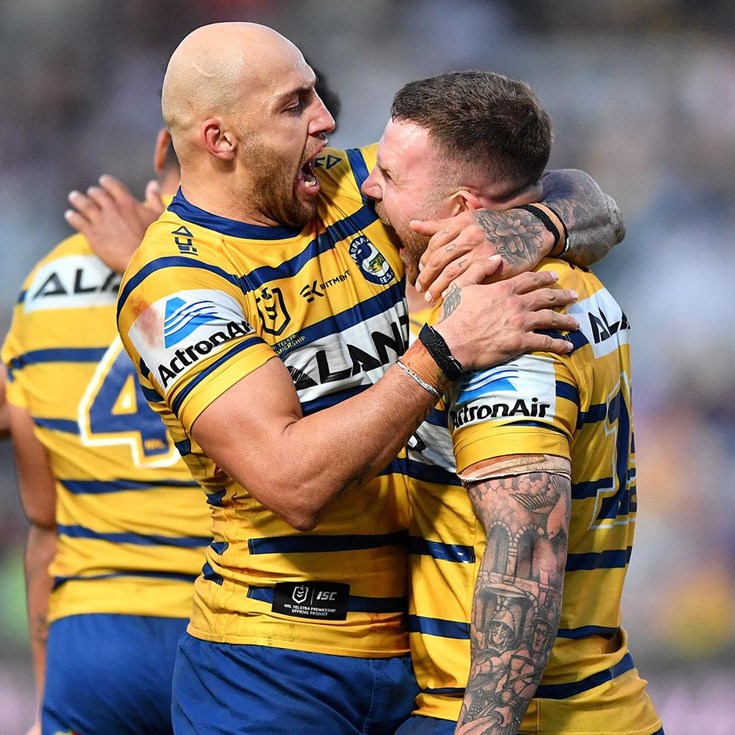