Almost exactly a year after their record-breaking finals loss, the Brisbane Broncos are on the verge of another new low – the wooden spoon – having again been soundly beaten by the Eels at Bankwest Stadium.

An ankle injury which forced star second-rower David Fifita from the field early in the second half – and landed Parramatta prop Junior Paulo in strife – added to Brisbane's pain in the 26-12 loss.

Paulo came in to complete a tackle on the bustling forward but, in what appeared to be an accident, contributed to him falling awkwardly. The Eels will face a nervous wait to see whether the front-rower is hit with a dangerous contact charge for a "hip drop".

But coach Brad Arthur was adamant that Paulo has no case to answer.

"There's nothing much in that, is there? It shouldn't have even been a penalty," Arthur said in his media conference.

"That's not a penalty. What is he supposed to do? No way. That was not the description of the hip tackle."

Parramatta were nowhere near as clinical as in their 58-0 demolition 12 months prior and didn't completely find their groove, but the victory keeps the side in the top four.

Fullback Clint Gutherson set up the opening try for Blake Ferguson and scored two four-pointers in the first half to lay the foundations for a triumph in Ryan Matterson's 100th game.

The Eels had averaged 12 points per game since round 12 and failed to score a try against Penrith last week, so the comfortable result comes as a timely boost ahead of the finals in a fortnight.

"It was a step in the right direction, it was better," Arthur said.

"I thought we tried to play a lot more football. We played a nice power game there for a while. The second half, it would've been nice to nail a couple of those opportunities, but we've got to give credit to the Broncos - they were brave."

Brisbane remain on just three wins alongside the Bulldogs, who upset South Sydney on Thursday, but sit at the foot of the ladder because of a far worse differential.

The Broncos must beat the Cowboys next week and hope Canterbury lose to the ladder-leading Panthers to avoid coming last for the first time in the powerhouse club's history.

Things started badly for the visitors, who were already missing prop Payne Haas for family reasons, as five-eighth Tyson Gamble was concussed in the first minute.

With Gamble off, Kotoni Staggs moved to five-eighth, Richie Kennar took his place at centre and Xavier Coates came off the bench and on to the wing.

After an initial arm wrestle, winger Ferguson crossed for his second try of the season in the 21st minute thanks to a slick cut-out pass from Gutherson.

Winger Maika Sivo scored after flying onto a Mitchell Moses long ball before the Broncos hit back through a rampaging Fifita, who ran over the Eels halfback.

It wasn't long before Parramatta had again seized control, however, with captain Gutherson grounding the Steeden after picking up a deflection from his own grubber kick.

And the "King" promptly grabbed his double in the shadows of half-time, running a sweeping line from a scrum and slicing between Herbie Farnworth and Corey Oates.

Farnworth dives on a Boyd kick

Fifita's injury didn't stop the Broncos from landing the first blow of the second half via Farnworth, but Eels five-eighth Field collected a wayward Issac Luke pass in the 49th minute and dashed 55 metres in the last scoring play.

Arthur wanted to give Gutherson, who ran for 186 metres, a solid break towards the end but only succeeded in taking him off in the dying moments.

"I can't get him to sit out one minute of training. But that's Gutho - that's what his teammates mean to him, that's what the club means to him.

"He just needs to keep being Clint Gutherson. I think he's doing a fantastic job for us. His leadership's improved and is getting better by the game." 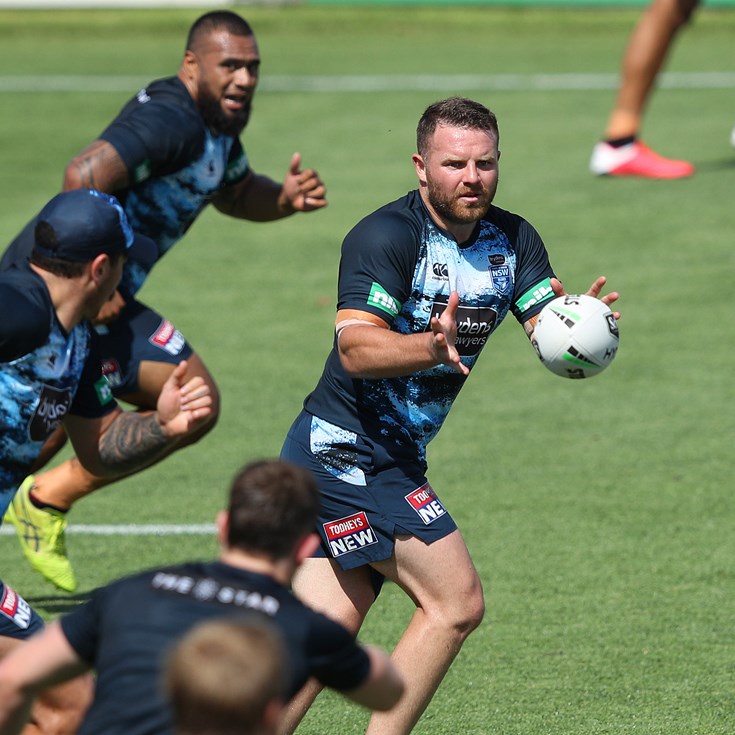