Brad Arthur predicted Blake Ferguson would be targeted by the Wests Tigers the moment he dropped his first high ball but praised the veteran for his match-winning efforts late in their 36-22 victory.

Ferguson's afternoon started in entertaining fashion with the Eels winger slipping over attempting to collect the kick-off before shaky efforts under the high ball led to two errors.

Wests Tigers playmaker Adam Doueihi continued the aerial raid throughout the contest but the 31-year-old winger defused several more bombs before setting up Clint Gutherson with a deft kick and scoring a second try on the siren.

"They were some tremendous kicks but he responded well and just had to move on from it, there's nothing he could do about it," Arthur said of Ferguson's errors early.

"It was a try and he had to move on. He handled himself well in the second half.

"We knew once he dropped that ball they were going to keep coming that way and he just had to, because he dropped one doesn't mean he's going to keep dropping them. He knows how to catch a footy. He's a very good winger so he did his job."

The Eels looked in cruise control to lead by 14 midway through the second half but the home side enjoyed a weight of possession to storm home with two tries and set up a grandstand finish.

Get Caught Up: Round 4 must-see moments

"That's his job to finish tries and one of those was a really nice try at a big time of the game for us but he's been strong out of the backfield and that's his value for us," Arthur added.

Ferguson's late heroics fended off a fast-finishing Tigers outfit who showed plenty of fight to send a scare through the Eels camp.

The Eels looked comfortable early as they skipped to a 16-0 lead with tries to big men Marata Niukore and Isaiah Papali'i breaking the spirit of the pro-Tigers crowd of 29,056 at Stadium Australia.

A double to Tom Opacic before halftime put the visitors further in front after Wests Tigers young guns Daine Laurie and Stefano Utoikamanu crossed in the midway through the first half.

Ferguson hit back later in the second half with a try of his own to extend Parramatta's lead to 24-10 as Gutherson clicked into gear to set up his winger on the right side.

A 40/20 to Reed Mahoney continued the visitors' momentum midway through the second half but the Eels began to fall away with their completion rates, which didn't please Arthur despite the result.

"Too many fundamental errors in the second half and a lack of respect for the footy," was Arthur's analysis of the opposition's comeback.

"There are some things there where we can go away and we know we've still got a lot of improvement in us, but it's tough to win week in and week out in this competition.

"They were up for it, the Tigers, and they came after us so we had to fight and scramble and hang on. We did that and I'm pretty proud of the effort." 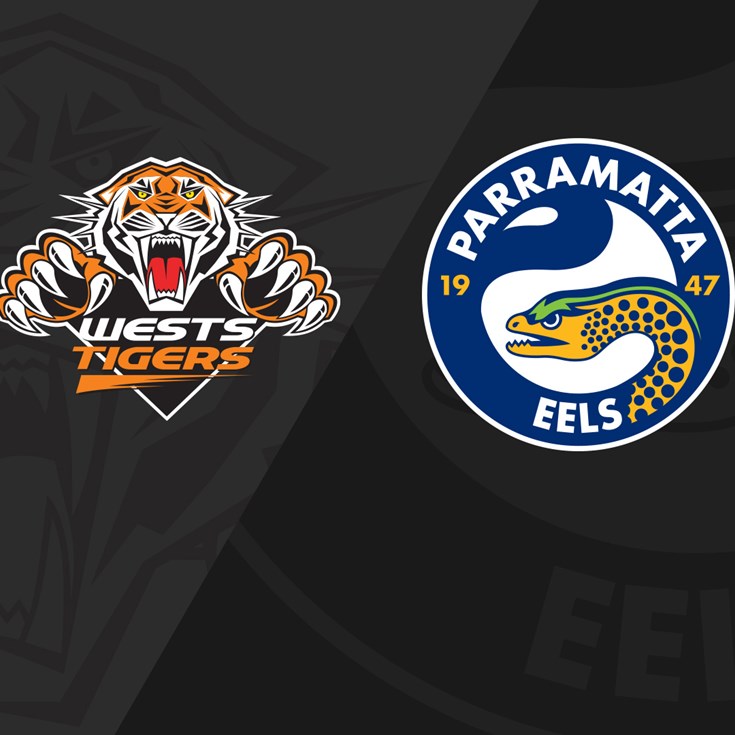