On a day when Manly mourned the loss of maroon-and-white icon Bob Fulton the teen prodigy he lured out of Parramatta's junior ranks, Josh Schuster, lay claim to Fulton's old No.6 jersey with a sizzling Eel-slaying performance to make the old patriarch proud.

The Sea Eagles wore black armbands and observed a moment's silence before upsetting the Eels 28-6, news of Fulton's death coming as Manly's team bus made its way to Bankwest Stadium.

A pre-game injury to named five-eighth Cade Cust meant Schuster shuffled to the halves in jersey No. 12.

He'll take serious shifting from here on out, even with veteran Kieran Foran's broken hand on the mend.

Schuster had a hand in all three first-half tries for the Sea Eagles, sparking an age-old "Maaaaaanly" chant that reverberated around Parramatta's western Sydney fortress only a few minutes after kick-off.

It was Fulton and his son Scott who spotted Schuster and convinced the western Sydney junior to target the Fulton's famous old five-eighth spot as his own.

"They scouted me at a Parramatta trial, [Fulton] and Scotty Fulton gave me the opportunity to represent this proud club," Schuster said afterwards.

"His influence played a big part in me moving to Manly. But my first training session at Manly I loved the culture.

"I played at Parra all [through] my juniors so to play NRL against Parra, I've got a couple of schoolmates - Oregon Kaufusi, Dylan Brown didn't play - but it was good to get the win over them.

"It's very sad news for the family. He's played a big part in my career since I was 14 years old.

"I just want to pay my respects to him and his family going through a rough time."

Weighing in at 109 kilos a month after his 20th birthday, Schuster led from the front as Manly shot to a surprise 16-6 halftime lead, having Waqa Blake in all sorts as he repeatedly came calling down the left edge.

For captain Daly Cherry-Evans his side's ability to control their emotions, until a moving team song after putting Parramatta to the sword, proved the best tribute of all to Fulton.

“It is one of those weird ones where it is massive news so you are shocked,” Cherry-Evans said.

“You have to try and put it to the side for that moment and just know that the best thing that myself and the team could have done today was perform well out of respect to the news.

“It is probably not until after the game that it has all really hit and it is really saddening news.

"He is someone who has made such a massive mark on the game. These moments are never easy to swallow, but I hope to some small degree that we have made his family proud on what is a really difficult day for them.”

Schuster's sleight of hand laid on Brad Parker's first and another for Karl Lawton as well.

The latter's four-pointer came in his first 60 seconds as a Sea Eagles first grader, making his way on to the score sheet via the Warriors with a busted Achilles to boot.

Schuster and Turbo draw in the defence and Parker scores

Within six minutes Lawton was back on the sidelines, sin-binned and cited for hitting Nathan Brown high.

Tof Sipley (crusher) and Cherry-Evans (high tackle) also ended up on report while Reagan Campbell-Gillard and Blake (high tackles) will come under scrutiny on Monday as well.

Parker's second try came a week after Magic Round but, such was the speed and skill with which he collected a Reuben Garrick chip back infield, it belonged back there in the aptly named event.

The halftime siren that went off when Garrick lined up and missed his sideline conversion, best left right out.

Aside from a sublime flicked offload from fan favourite Isaiah Papali'i that sent Clint Gutherson over, the Eels found little to savour in this one.

Cherry-Evans and Tom Trbojevic linked repeatedly to expose a sluggish Parramatta middle defence, before Schuster was prominent once more in the left-side shift that sent Garrick over after the break.

Further sin-binnings to Campbell-Gillard (high tackle) and Jake Trbojevic (professional foul) reduced proceedings to a 12-a-side affair, then 13 v 12 when Blake's afternoon ended with an early breather as well.

But Parramatta still couldn't find their groove or the try-line.

Even the consolation try didn’t go their way. Instead it was Trbojevic on hand with the final play of the game, a deserved four-pointer to cap his 282 running metres, eight tackle busts and two try assists.

With six wins from their past seven games Manly have shot to outright sixth on the ladder heading into the Origin period.

Andrew Johns pondered in Channel 9 commentary if "Manly can challenge for a title based on what we saw today".

On the day they farewelled another Immortal in Fulton, Schuster made clear his old No.6 jersey is in good hands. 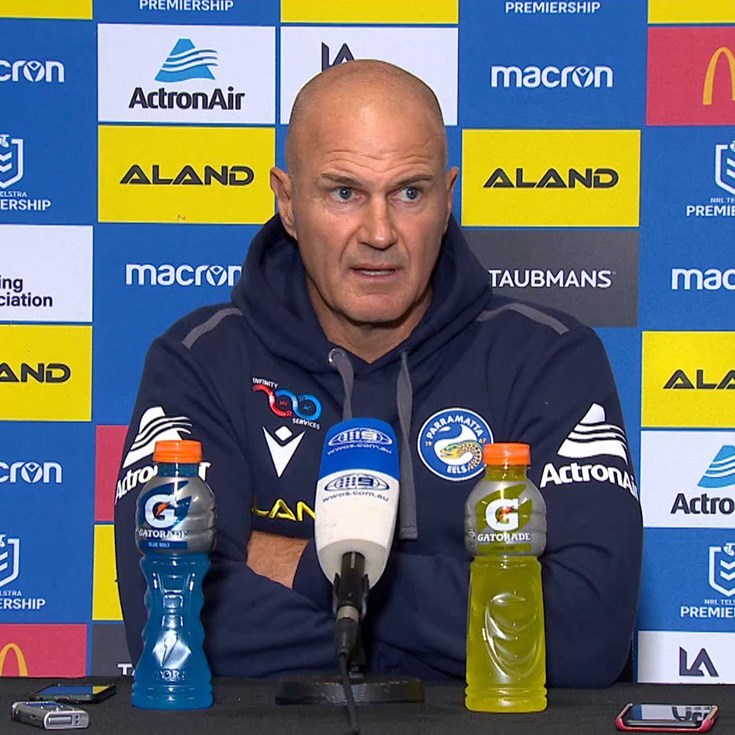