Cody Walker sent a reminder of his talents to NSW coach Brad Fittler by steering South Sydney to a 38-20 defeat of Parramatta at Stadium Australia on Saturday but his Origin hopes may be in the hands of the NRL judiciary after he was one of five stars placed on report.

Murray is considered a certain NSW selection after making a successful return from an ankle injury. But Souths coach Wayne Bennett admitted there were concerns he may be ruled out over a crusher tackle on Blake Ferguson.

"Obviously that was a crusher," Bennett said. "That is in the hands of the judiciary now and if he gets a week he misses Origin but it won't impact on South Sydney.

"Cam Murray is always good. I haven’t seen him play a bad game since he’s been with us. If everybody in the game had his attitude then you wouldn’t have bad teams."

Walker had a hand in five of his side’s seven tries as the Rabbitohs left edge all but put paid to Ferguson’s prospects of a NSW recall, with his opposite winger Alex Johnson scoring a hat-trick and centre Dane Gagai also crossing for three tries.

"It was nice to bounce back after the last couple of weeks, we've got off to some bad starts, and against good teams you’ll get punished for it," Gagai said.

"Tonight was about giving back to our fans. We’ve let them down the last few weeks."

Johnston, who took his season tally to 12, added: “I’ve reaped the rewards for a while now, and I was glad to see ‘Gags’ get three as well, he feeds me all the time and I’m stoked for him."

Bennett praised Johnston, who was the NRL's leading try scorer last season with 23 and is now just three behind Melbourne's Josh Addo-Carr.

"He is a winger, that is his real position and a lot of the guys playing on the wing these days aren't wingers," Bennett said.

"That's why he makes it look so easy and graceful. Addo-Carr is a winger and they are wonderful to watch. He can play other positions but that is his best position."

Souths Sydney's return to form after last Sunday’s 56-12 loss to Penrith and a 50-0 defeat by Melbourne three weeks ago was overshadowed by the potential loss of Walker, Murray, Mahoney, Brown and Matterson from Origin contention.

Brown was placed on report twice for crusher tackles on Walker and Souths second-rower Keaon Koloamatangi, who was also the alleged victim of dangerous contact from Mahoney, while Matterson was sin-binned for a high shot on Tevita Tatola.

Johnston has another hat-trick at Stadium Australia

Walker, who is vying with Canberra’s Jack Wighton and Penrith’s Jarome Luai for the NSW No.6 jersey or a place on the interchange bench, was reported for a high tackle on rookie Eels five-eighth Jakob Arthur.

The star five-eighth was suspended earlier this season for striking Canterbury’s Nick Meaney and also fined for a contrary conduct charge from the same match.

If he escapes a charge, Walker will have given Fittler food for thought as he combined with fellow Indigenous stars Gagai, Johnston and Latrell Mitchell to terrorise the Parramatta right-edge defence, while hooker Damien Cook was also in top form and should retain the NSW No.9 jersey.

"I don’t think they need any reminding. I think anyone who watches him play week in and week out knows how good he is," Bennett said of Walker.

“Five-eighth is his position, but he is a footballer and he can play centre if he has to or fullback if he has to.”

Cook opened the scoring in just the second minute of the match when he raced over from a scrum win near the Parramatta line after Eels captain Clint Gutherson lost the ball in a tackle by Walker and prop Mark Nicholls as he returned an Adam Reynolds kick.

Walker then combined with Mitchell to put Johnston in for his first try in the 10th minute but a Gutherson try from an Arthur kick gave the Eels a glimmer of hope.

Gagai gets a hat-trick of his own

However, the Rabbitohs took advantage of the sin-binning of second-rower Isaiah Papali'i for a professional foul after a try-saving tackle by Gutherson on centre Taane Milne to take a 20-6 lead at halftime after tries to Gagai and Johnston.

Walker was the creator of both tries, combining with Mitchell to lay on Johnson’s second try in the 31st minute and then throwing a cut-out pass for Gagai to score two minutes before halftime.

Cook sneaks over from the scrum

Gagai got his second try in the 46th minute off a Walker pass following a scrum win and the pair combined for Johnson’s third try in the 61st minute.

Not to be outdone, Gagai completed his hat-trick six minutes later before Mika Sivo and Arthur scored late tries for the Eels.

Gagai explodes through the line for his double 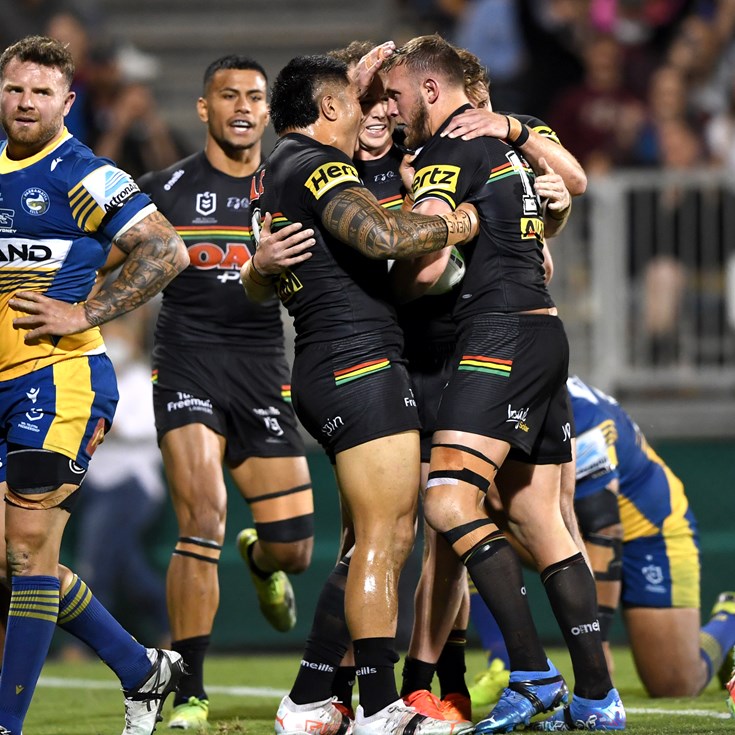