Reed Mahoney is expected to spend a fortnight on the sidelines after suffering a shoulder injury in the final minutes of Parramatta’s 40-4 rout of Newcastle at McDonald Jones Stadium on Sunday.

The Eels scored eight tries to one to outclass the under-strength Knights but the setback for Mahoney took some of the gloss off their first win in three weeks.

Reaching out to tackle Knights debutant Jake Clifford in front of Newcastle’s posts in the 68th minute, Mahoney clutched at his left shoulder injury and had to be helped from the field by medical staff.

Only a minute earlier, Mahoney was on the receiving end of a late tackle by Sauaso Sue which earned the prop 10 minutes in the sin bin.

It was initially feared Mahoney had suffered a long-term pectoral muscle injury but Parramatta coach Brad Arthur believed the 23-year-old Maroons hopeful would only miss up to two games.

"I don’t think it’s too bad. He sub-luxed his shoulder, so he might miss a couple of games," Arthur said.

"He’s still got to have scans tomorrow but at this stage, I reckon maybe a couple of games."

The Eels face Wests Tigers and the Bulldogs in their next two games before the representative round bye and Arthur will look to Joey Lussick or Nate Roache to fill the breach during that period.

"He just felt his calf tighten up and I think there was 25 minutes to go, and we’d just scored, so it was a good opportunity to let some other boys step up," Arthur said.

"He’s fine but his calf tightened up so I just didn’t want to take any risks there."

Mahoney, who left Queensland’s Origin camp on Saturday to rejoin the Eels for their final training run, threw the last pass for two of Parramatta’s eight tries to be one of the architects of their win.

After losses to South Sydney (38-20) and Manly-Warringah (28-6) in their previous two games, the Eels had the two points all but secured when they led 22-0 at half-time and went on with the job in the second half to remain in third spot behind Penrith and Melbourne.

Parramatta ran in five first-half tries, including three in eight minutes closing in on half-time, and should have led by more than 22-0 but Moses was on target with just one conversion.

The Eels quickly established their authority in the middle and tries by Ryan Matterson in the fourth minute and Haze Dunster in the 18th gave the visitors an 8-0 lead.

Left winger Maika Sivo crashed over to score tries in the 30th and 36th minutes, then threw the final pass for Clint Gutherson to touch down in the same corner 90 seconds before the half-time siren.

Bryce Cartwright, Opacic and Waqa Blake added second-half tries then Enari Tuala crossed for the Knights in the 76th minute to prevent a shut-out.

Without seven regulars and with three debutants in their squad, Newcastle looked for inspiration from former players on their annual "Once A Knight" Old Boys’ Day but were never in the contest.

Apart from seeking improvement on their performances in the past fortnight, Arthur wanted the Eels to start well to drain any possible emotional energy out of the Knights and keep the crowd of 23,015 out of play.

"It’s good to come here on a big occasion for those guys with their Old Boys’ Day, so we really wanted to front-load our effort today, and I thought our effort was really good right from the start and right to the end," Arthur said.

"But still, I’m a touch disappointed with parts of the second half.

"When it got to 40-0, we just needed to make sure we got the ball down the other end of the field and we ended up on our try-line for 20-odd tackles and conceded that try at the death.

"We need to be a bit better there, but there were some big improvements from what we’ve seen over the last couple of weeks on some moments and some execution of our defence."

Mahoney, Gutherson, Moses and five-eighth Dylan Brown, who returned from a three-game suspension, had a field day against the Knights, who made too many mistakes on both sides of the ball to mount any serious challenge.

Sivo steamrolls over To'a for his second

"He’s a 50-gamer, he’s very good defensively with his one-on-one tackles, and I thought it was probably the best he’s attacked today too.

"He’d been a little bit rusty in attack throughout the early rounds of the season but I felt like he attacked pretty good today."

The Knights face another difficult assignment against South Sydney at Stadium Australia next Saturday and the Eels will host the in-form Wests Tigers at Bankwest Stadium next Sunday. 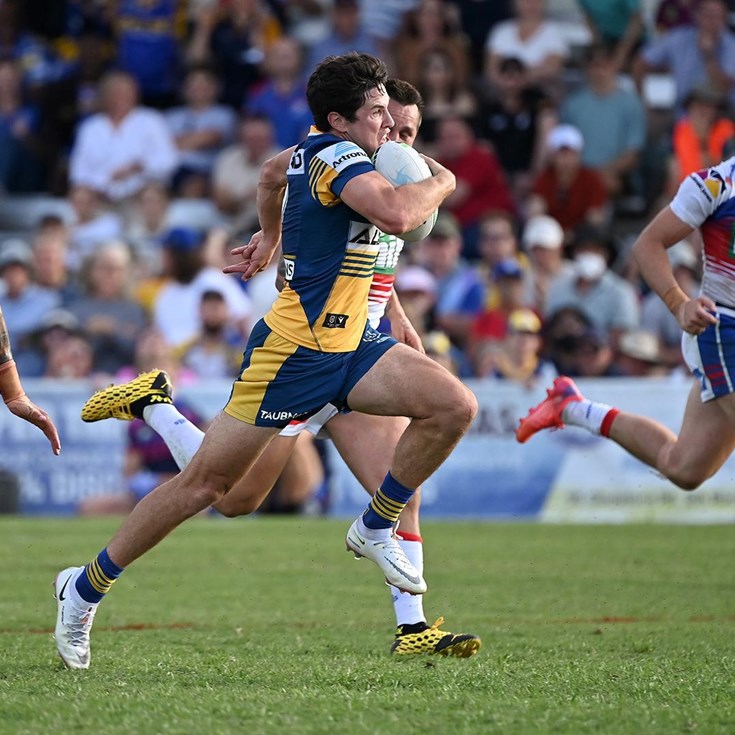 Moses floats a pass across for Ferguson to secure a double

Penisini with some serious skill to set up Ferguson