The late withdrawal of NSW playmaker Mitchell Moses has not stopped Parramatta punishing a full-strength Titans 26-8 on Friday night.

In his absence up stepped hooker Reed Mahoney who returning from five weeks out with a shoulder injury. The Queenslander scored and had the home side on their toes all night.

Eels coach Brad Arthur praised the efforts of his No.9 in returning from injury, whose enforced layoff could turn out to be a blessing in disguise.

"He was pretty good Reedy; he threw some nice passes and helped out the young halves combination," Arthur said.

That was in reference to Arthur's son Jake, who played his fourth NRL game with Origin halfback Mitch Moses rested along with Blues prop Junior Paulo.

"I thought Reed really steadied the ship for us, brought the energy," Arthur added.

"You never want any of them to get injured, but his injury might be a good thing in the long run.

"He got four or five weeks off there. He's someone we can play 80 minutes every week so hopefully, he's got some fresh legs towards the back end of the year."

The Eels' win was sparked by a stunning first-half points rush after Titans co-captain Kevin Proctor was sin-binned for a lifting tackle in Isaiah Papali'i with the Eels running in three quick tries against 12 men.

While Arthur was disappointed with his team fading somewhat in the second half, given the disruption of the mid-week rush to relocate to Queensland he couldn't be critical.

"It's been a tough week, everyone's lives have been turned upside down," Arthur said.

"We made a real point about getting on with the job. We're so grateful we can continue to play and we needed to show that in our first half and we showed that with great intent and focus.

"Everyone's chipped in and done the job. I thought we might get a bit sloppy at the end, our discipline dropped off a bit but the purpose around our start showed we're here to do a job.

"This can make us tighter, it can make us stronger. The opposition tonight, they probably didn't have to go through the same as the Sydney clubs coming up here.

"On the whole, I'm a touch disappointed with the second half but we wanted to front-load our effort and get the job done."

The loss brought Gold Coast back to earth after they had ended a four-game losing streak with a 44-6 thumping of Canberra before last round's bye.

The Titans started the game just one win outside the eight but will now battle to emerge from a logjam of sides fighting for a finals sniff at the back end of the season.

The Eels led 20-0 at halftime and blew the deficit out further after Clint Gutherson and Haze Dunster combined to send dominant back-rower Ryan Matterson over in the 50th minute.

The Titans got on the board in the 62nd minute when Brian Kelly latched on to an Ash Taylor cut-out pass.

And they had another five minutes later when Fifita reeled in a Tyrone Peachey grubber to cut the deficit to 26-8 but it was too little, too late.

Summing up their night, Fifita was denied a second try on the stroke of full-time.

Adding injury to insult for the hosts, playmaker Jamal Fogarty went off with a hand injury midway in the second half, Ash Taylor left in the final 10 minutes for a HIA while winger Phillip Sami went down with an ankle injury in the 34th minute.

The pressure was on Eels five-eighth Dylan Brown to produce something special from the outset with Moses sidelined and his replacement Arthur lasting just four minutes before coming off for an HIA assessment which he later passed.

Brown didn't disappoint, cutting through the Titans defence and running around Brimson to score a stunning 50m solo try in the 10th minute.

Matterson finishes off some razzle dazzle

But the highlights had only just begun for the Eels who showed no mercy after Proctor was binned in the 22nd minute.

Shaun Lane ran off Mahoney to score in the 23rd minute then two minutes later it was 16-0 when Mahoney helped himself to a try after a Matterson bust.

Then Gutherson kicked for winger Dunster to score in the 28th and suddenly it was 20-0.

For the Eels, Matterson was placed on report for a high shot on Brimson in the 61st minute and Mika Sivo joined him in 75th minute for a dangerous tackle. 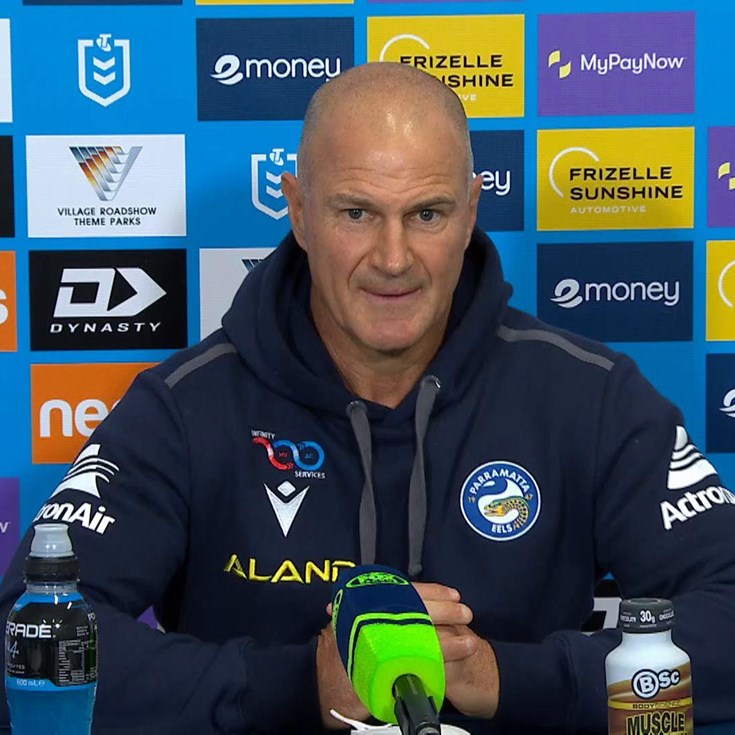 Matterson finishes off some razzle dazzle

Matterson into the backfield and Mahoney is in support to score