Parramatta's title hopes are hanging on a knife's edge with fears Reed Mahoney's season could be over after he suffered a shoulder injury late in a 40-12 loss to the Rabbitohs on Friday night.

Mahoney was reduced to tears on the sidelines as he made a gut-wrenching walk around an empty Cbus Super Stadium after a tackle attempt on Latrell Mitchell left him clutching at his left shoulder with four minutes left on the clock.

It was the same joint he dislocated in round 13 against the Knights, which put him out for four weeks.

Eels coach Brad Arthur conceded the initial signs weren't good for the 23-year-old with scans to confirm the extent of the injury on Saturday.

"It could be the end of him for the year," Arthur said.

It compounded a difficult night for the Eels, who slumped to three consecutive losses, their worst run since 2019, as the Rabbitohs ran in six tries to two.

Arthur not optimistic around Mahoney injury

On a night Adam Reynolds surpassed club legend Eric Simms' 46-year points scoring record in style, it was Cody Walker and Latrell Mitchell who produced the plays to get their halfback within striking range to pile on the points.

Reynolds slotted a 45th-minute conversion to reach 1,842 points, surpassing Simms (1,841) as the Rabbitohs cruised to a 32-0 lead midway through the second half to leave Arthur with more questions than answers.

Mitchell Moses got through a back injury unscathed but he couldn't help the side's recent attacking woes despite an individual piece of brilliance late for Waqa Blake to cross the line.

After a 28-0 loss to the Roosters last week, Parramatta went another 56 minutes before getting over the line through Maika Sivo.

However, the damage had already been done with the Eels struggling to contain a red-hot Walker and Mitchell, who for the most part were in cruise control.

"It's disappointing, the boys are disappointed," Arthur said.

"They just outplayed us, they were too good. Simple as that.

"They iced their plays when they needed to. They're playing full of confidence and things worked.

"We're a bit low on confidence at the moment."

A double to Josh Mansour in the first half started proceedings before Dane Gagai, Jaxson Paulo and Cameron Murray crossed within eight minutes after half-time for a 32-0 lead. Paulo scored again in the shadows of fulltime.

Brown offloads at the line and Sivo scores

Arthur has further concerns on top of Mahoney's injury with Oregon Kaufusi copping a head knock in first tackle of the game.

Isaiah Papali'i was also placed on report for dangerous contact on Paulo after he led with the knees in a tackle.

Despite the night going against them in most areas, Arthur believed they could keep their top-four aspirations alive during the next month amid a difficult run home.

"The last couple of games we haven't been good but we can't panic," he said.

"We did a lot of work early to get ourselves in a reasonable position. We need to be able to move on from it." 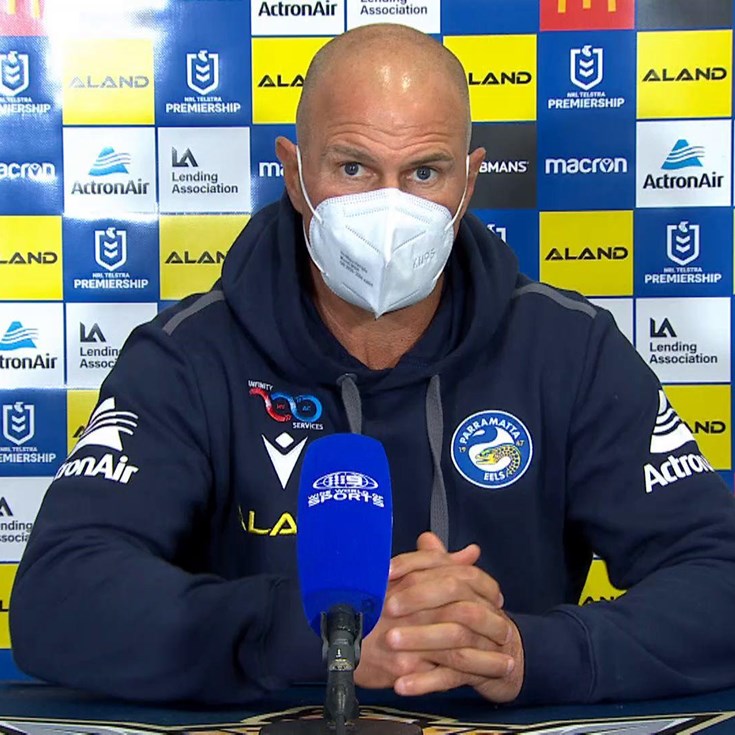 Brown offloads at the line and Sivo scores

Big effort play from Matterson to track down Gagai