It was a relieving 32-16 result as halfback Mitchell Moses stood up to ensure Parramatta snapped their four-match losing streak.

Arthur labelled the performance "Mitchy's best running game of the year" after the No.7 tallied three try assists and kicked beautifully.

It may not appease the doubters, but Arthur said the style of the victory wasn't of much importance after a lean trot that has resulted in the Eels slipping from the top four before the finals.

"We had one job tonight and that was to win a game of footy," he said.

"It's very hard when you've lost four in a row in the form that we've been in to come and execute your plan and get it right straight away.

"I thought we tried hard. Two things that we wanted from the boys were a bit more energy and to be more aggressive with our line speed and our defence - and we got that."

Sivo had to be helped from the field by two trainers in the 25th minute after being twisted awkwardly in a two-man tackle.

"Obviously, he'll need scans in the morning, but we'll be pushing it to get him back this year, I reckon," Arthur said.

"Fergo [Blake Ferguson] is back this week, so Fergo will come back on to the [right] wing and Haze [Dunster] will probably have to swap over to the other side of the field."

The coach will hope he isn't forced into making more changes with hooker Joey Lussick placed on report for a shoulder to the head of Cowboys halfback Tom Dearden as he applied kick pressure.

Hard-working lock Nathan Brown could also come under scrutiny having been penalised for a crusher tackle in the first half.

Parramatta are now on 30 points – level with the Roosters (who play on Sunday) and the Sea Eagles – but remain sixth on differential.

Arthur acknowledged they'll need to improve sharply with clashes against the Storm and Panthers prior to the playoffs.

It was a somewhat shaky start with Nathan Brown making an error in the first set before a try was bombed when Waqa Blake streaked down the touchline and threw a forward pass to Dylan Brown.

But Parramatta quickly enjoyed more success shifting down their left edge with Sivo dumping the ball back inside for Blake to collect the bounce and touch down in the eighth minute.

That was backed up by some Moses magic as he took advantage of the disjointed defence, dummying and zipping away before linking with Will Penisini who scored his first NRL try to make it 8-0.

North Queensland stuck to the task, however, and appeared to have eaten into the margin when Hamiso Tabuai-Fidow found the line, but the Bunker spotted a knock-on from the young gun.

Moments after Sivo's exit from the field due to a knee injury, promising Cowboys second-rower Heilum Luki stormed on to a short ball from fellow forward Mitch Dunn and got his team on the board.

The ball comes out of a kick contest and Smith scores

Moses put Shaun Lane over the line in the 29th minute to reassert the Eels' dominance but it took a while to secure the win.

They began to pull away when Will Smith crossed in the 56th minute after prop Junior Paulo skilfully tapped on a dropped bomb by North Queensland youngster Daejarn Asi.

In the following set, Moses speared the Steeden to Haze Dunster who tip-toed down the paint and then placed a lovely inside kick that captain Clint Gutherson snaffled to score.

A rally from North Queensland kept the contest interesting, but Todd Payten's troops were consigned to their 10th consecutive loss as Dylan Brown pounced on a dropped ball to score in the 75th minute. 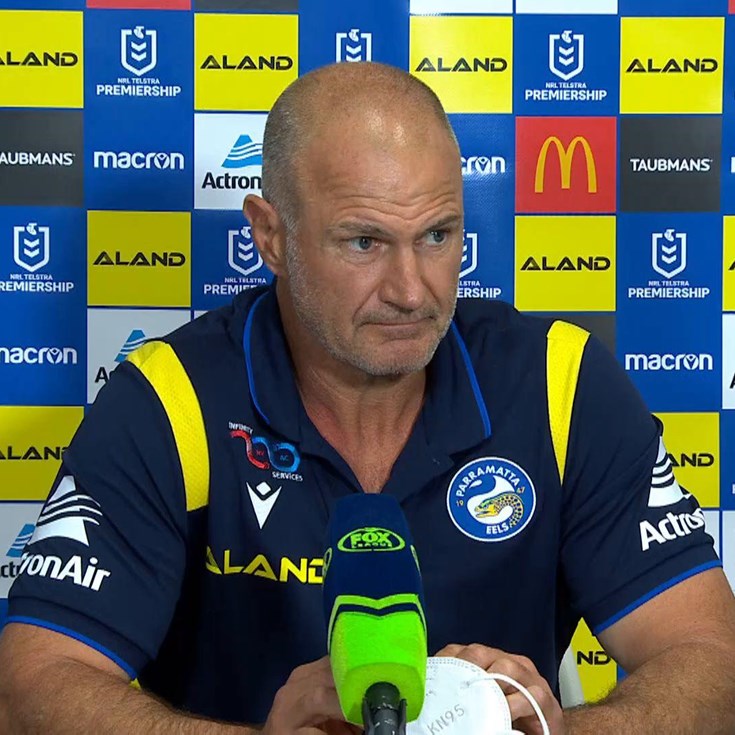