The Parramatta Eels could not take advantage of a 20-6 second half lead to lose 26-20 against the South Sydney Rabbitohs at ANZ Stadium on Saturday night.

With two minutes to go South Sydney held a 22-20 lead, a Reynolds cut-out pass to Campbell Graham had the winger score his second try of the night.

Parramatta attacked early and South Sydney was strong on their line to prevent conceding points.

The Rabbitohs found the first points in the 13th minute through Dane Gagai, receiving a dummy-half pass from Damien Cook deep in Eels territory.

Despite being behind on the scoreboard, Parramatta built pressure by forcing three goal-line dropouts in the opening 20 minutes.

The home side continuously gave away penalties and were forced to play without Hymel Hunt, who was sent to the sin bin in the 26th minute.

Moments later, Parramatta had their first try when Campbell Graham failed to catch a cross-field Corey Norman kick in the 28th minute and Clinton Gutherson pounced on the loose ball.

Jarryd Hayne injected himself into the middle of the field, split the Rabbitohs forwards near halfway off a Peni Terepo pass and ran around the cover defence to put the Eels up 12-6 in the 32nd minute.

Hunt attempted a one-on-one strip on a determined Michael Jennings, was unsuccessful and was made to pay with a try as the Eels had the Rabbitohs reeling with an 18-6 lead into halftime.

Hayne looked to have a double when he intercepted an Adam Reynolds pass and sprinted 80 metres, only for the Bunker to rule a Hayne knock-on during the intercept.

In the 51st minute South Sydney went within centimetres of scoring when Cody Walker lunged the ball towards the try line, only to ground it agonisingly short.

A 20-6 Parramatta lead came when the Moses converted a penalty goal, after the Rabbitohs conceded back-to-back penalties in the 54th minute.

It was 44 minutes between South Sydney’s first and second tries, number two scored by Graham in the corner from a Gagai pass for a 20-10 score.

Daniel Alvaro was forced from the field in the 60th minute for the head injury assessment due to a knock in a tackle from Thomas Burgess.

The Rabbitohs brought the Eels’ lead to four points when Robert Jennings took advantage of a Eels line short in numbers.

Pressure remained on the Eels and too many penalties for the referee’s liking had Corey Norman sent to the sin bin in the 66th minute.

Scores were locked up by Dane Gagai, scoring his second try in the 66th minute and Reynolds converting to regain the lead at 22-20.

Kaysa Pritchard left the field with a dislocated right shoulder in the 7th minute and did not return. Last week’s match against the Bulldogs was first since Round 9 after an injury layoff. 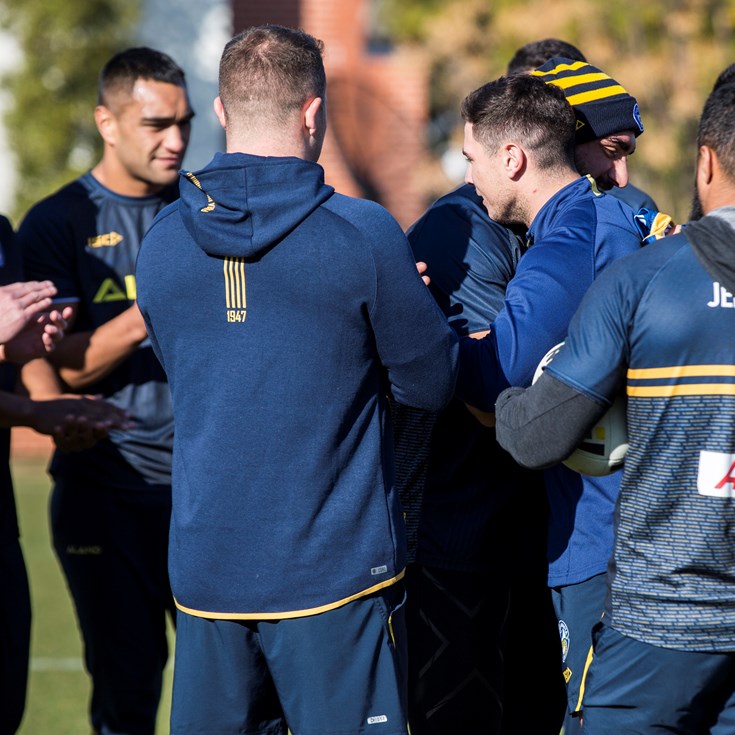