Jarryd Hayne scored a first-half hat-trick, making himself Parramatta’s second highest all-time try scorer and sent the Eels on a 40-4 win against the St. George Illawarra Dragons at ANZ Stadium on Saturday night.

Hayne’s first try, his 110th for the club, equalled Brett Kenny’s career mark and by full-time he sat 11 tries away from Luke Burt’s tally.

The win moves the Eels off the bottom of the ladder.

They’re now 15th, ahead of the North Queensland Cowboys based on points differential.

Parramatta scored 22 first-half points for the second consecutive week and held the Dragons scoreless in the period.

As soon as Parramatta got within the attacking 20m zone in the third minute, Mitch Moses shocked the Dragons for first points with a 25m pass for Hayne to score untouched in the corner.

Hayne received a boot to the face while attempting to catch a high ball, got heavily taped and passed Kenny on the scoring list moments later in the 11th minute.

Kane Evans created an overlap for Michael Jennings at halfway, to link up multiple times with Hayne on the wing and establish a 10-0 lead.

Pressure remained on the Dragons and when Moses became a bootlace tackle away from a linebreak, Cameron McInnes was sent to the sin bin for holding him too long in the tackle in the 26th minute.

The Dragons conceded another try, this time off a scrum to George Jennings for a 16-0 Eels lead.

In the 37th minute Jaeman Salmon placed a high kick between the defending winger and fullback that bounced and sat up for Hayne to score a hat-trick.

Out from intermission, St. George Illawarra got on the scoreboard when Luciano Leilua caught a cross-field kick on the tryline, making it 22-4.

A grubber kick through to the in-goal from Moses became one of his four try assists on the night, as Gutherson grounded the footy first.

Moses joined the try scorers with a solo effort. He faked a kick, ran between the defence and faked out Matt Dufty to complete the 40m effort in the 51st minute.

Gareth Widdop left the field with a shoulder injury in the 28th minute and did not return.

The Parramatta Eels next play the Melbourne Storm at AAMI Park on Friday 17 August at 7:50pm. 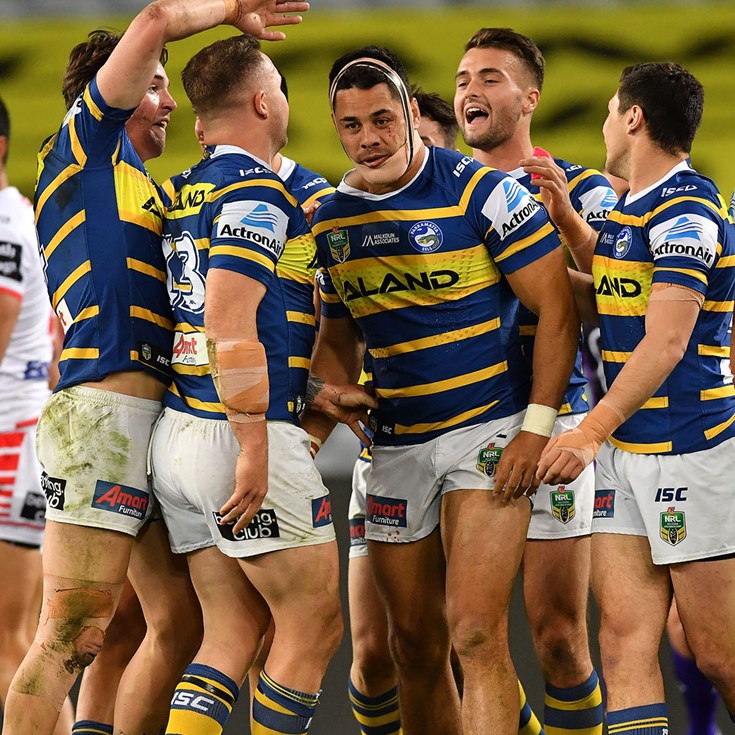