Fox Sports presenter, and proud Parramatta Eels fan, Adam Hawse has taken a look back at Parramatta's history at the site of Bankwest Stadium. It will be a historic occasion when the Eels take on the Wests Tigers at the Blue & Gold new home on Easter Monday and Hawse looks back at the past.

BRETT KENNY takes a glance at the ceiling and a wry smile appears.

A tour of the new $360 million Bankwest Stadium has left the Eels legend in awe. The coliseum style arena that perches fans so close to the action they could call a set-play, has Kenny wishing he could run out there and latch onto another intercept like the good old days.

But it’s a simple ceiling inside the state-of-the-art dressing rooms that has caught Kenny’s eye.

“When we used to get ready in the sheds here, when it was the old Cumberland Oval, we always knew if reserve grade had scored a try.. because dirt would fall down on us,” laughed the 4-time premiership winner.

“Our change room was under the old timber grandstand. So when fans jumped up and down, dirt would fall through the cracks all over us.

“You’d be getting a rub down before the game, or listening to Jack (Gibson), and it would literally fall from the ceiling.”

Bankwest Stadium, to be christened by the Eels on April 22 against the Wests Tigers, thankfully has lovely, intact ceilings.

The 30,000-seat venue is the latest evolution of this site on the northern banks of Parramatta River.

Parramatta began playing here right from the start. Around 6000 fans turned up to see the club’s first ever premiership match against Newtown on April 12, 1947, which they lost 34-12.

Initially in those days it was called Parramatta Oval and the team was dubbed the “Fruitpickers” because of all the orchards in the area. It wasn’t until the mid-60s the team became known as the Eels, owing to the indigenous meaning of Parramatta as “the place where the eels lie down”

Cumberland Oval had a single grandstand with spectators forced to make do on basic seating, such as old railway sleepers. The attendance record was set in 1971…  when 22,470 crammed in to see the locals take on Souths.

What it lacked in seating and modern comforts, Cumberland more than made up for in pure intimidation.

“I felt sorry for the opposition,” says Kenny, who made his debut at Cumberland in 1980.

“They used to have to park over on O’Connell Street and walk across the northern hill.. and cop a barrage of abuse from Parra fans to get to the western side of the ground where the sheds were. That was great for us – a big advantage.”

Peter Wynn also debuted at the ground, alongside fellow legend Eric Grothe, in round one of 1979.

“The atmosphere was awesome. As you went out the gate – the colour, the noise - I’ll never forget it,’’ says Wynn.

“But when it rained it was a bog, and if it didn’t, you were forever losing the skin on your knees. Grounds weren’t really tended to back then.. just a hose to settle down the dust.”

Without realising it at the time, The Eels played their final game at Cumberland Oval on August 30, 1981. A 20-all draw with Manly, before going on to win their first premiership.

That was the day everything changed.

“I was in the Leagues Club. We’d won our first grand final and I was there till six in the morning,” says Wynn, of Parramatta’s maiden premiership , a 20-11 win over Newtown in ‘81.

“There was so much excitement - the place was chock-a-block. Then I remember looking out the window and seeing a massive fire… you just couldn’t comprehend what had happened. It was so unexpected.”

A mob of supporters, on a high after grand final glory, decided the Eels needed a new home ground. After all, plans for a modern stadium had been talked about for years.

So they burned Cumberland Oval to the ground. The dressing-rooms where the dirt fell from above, all gone.

All this was breaking out as their heroes partied through the night, just a few hundred metres away.

Kenny, a two-try hero against the Jets, added: “We had no idea how bad it was until first light the next morning. It was so busy inside – absolutely packed with people – we didn’t take much notice of what was going on outside. It was our first premiership.

“It was a bit of a shock really. You couldn’t believe someone would actually do that. A few days later it started to hit us - where will we play? Where will we train?”

Parramatta spent the next four seasons sharing Belmore Sports Ground with fierce rivals Canterbury, while training out of the very modest Granville Park.

Despite the inconvenience the Eels made another three grand finals, winning two.

Then it was time to come home.

After an official opening by Queen Elizabeth II on March 5, 1986, the new $15 million Parramatta Stadium hosted its first match 11 days later – and the Eels didn’t disappoint their legion of fans.

Back home for the first time since 1981, Parramatta crushed St George 36-6.

Wearing a club blazer, the injured Mick Cronin was honoured with the official kick off, before heading back to the stands.

A capacity crowd of 26,870 turned out for the occasion, backrower Steve Sharp scoring the first try from a Peter Sterling pass – the mercurial number seven earning a rare 10 out of 10 rating in Rugby League Week for his performance.

In that first season 250,000 fans flocked to Parramatta Stadium, at an average of more than 20,000 a game. It was widely considered the premier sporting venue of that era in Sydney.

“It was a special occasion that first game,” says Kenny.

“I’m a pretty laidback guy but I was nervous before I left home that day. I was able to score from an intercept off a Craig Young pass – great to score a try in the first game at our new home.”

The Eels went onto enjoy their most successful season, winning the minor premiership, then beating the Bulldogs 4-2 in the grand final. They also claimed the midweek Panasonic Cup title along the way.

After a lull from ’87 to ’96, the Eels once again turned Parramatta Stadium into a fortress, missing the finals on only three occasions between 1997 and 2009.

“It was sad seeing the old Parramatta Stadium getting knocked down - I used to love playing there,’’ says Tim Mannah.

“We trained there – we did everything there. It has so many fond memories for me and my family. I played with my brother (Jon) there in the 20s and played against him there when he was with the Sharks.

Mannah was part of the last Parramatta team to play at the venue, then known as Pirtek Stadium, on August 29, 2016. In a neat coincidence, the Eels again dispatched the Dragons, 30-16. A crowd of 13 thousand turned up on a chilly winter’s night.

Then the wreckers came in as part of the State Government’s pledge to overhaul Sydney stadia.

“When we opened Parramatta Stadium, I remember thinking ‘this is out of this world’,” says 265-gamer Kenny.

“Well, it was nothing compared to this.”

“The first thing you notice is how close everyone is to the action - it doesn’t matter where you are sitting,” enthuses Mannah.

“It’s like Suncorp Stadium but because it’s smaller and steeper it’s really another level. You can feel the atmosphere as soon as you arrive.

“It feels like a fortress – we want to make it so teams don’t want to come here.”

Players will enter the field via a walkway that takes them through a crowd of corporate guests, enjoying the Bankwest Stadium hospitality, in an exclusive area under the western grandstand.

It may stir old memories for anyone who remembers Parramatta’s original home.

“To warm up at Cumberland you had to go out to the cricket field next door – and that meant you had to walk through the canteen to get out,” Kenny laughed.

“You’d walk through smelling food as you went – which was tough, because most of us hadn’t had a feed since the morning! People would be lined up for pies and chips and we’d be walking right through them.

“The Bear, Bob O’Reilly, would have two guys from the club walk with him – probably so he didn’t grab a pie!”

Those Eels champions will be at Bankwest on Easter Monday, cheering on today’s team. What they’d give for one more gallop at this incredible arena.

“It’s awesome - those players are so lucky,’’ says Wynn. “To see those grandstands go right around – when they’re packed with people chanting for Parra – it will lift them to another level.” 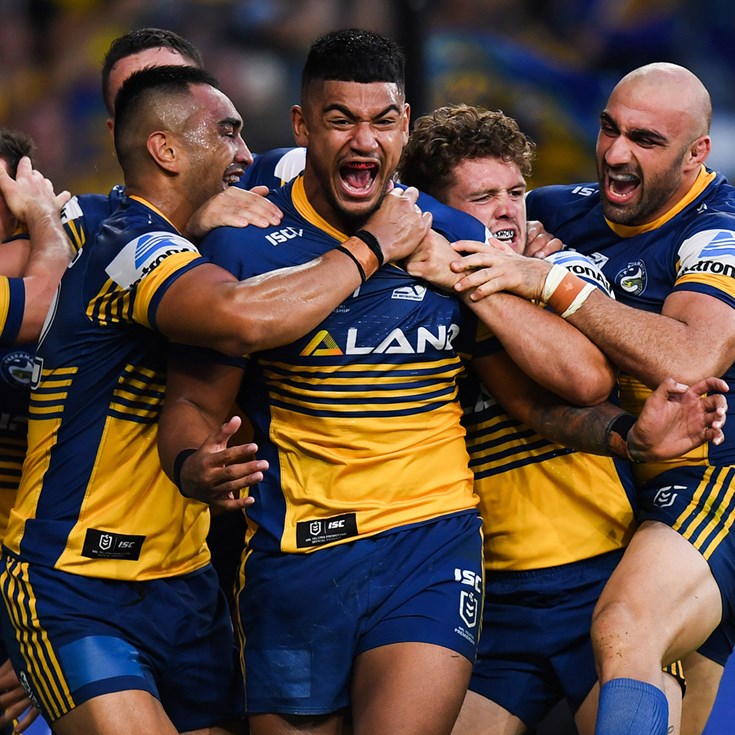