The Parramatta Eels take on the Manly Warringah Sea Eagles at Lottoland on Sunday 21 July in Round 18 of the NRL Telstra Premiership.

Coming off a 30-18 victory over the Wests Tigers last week, Blue & Gold Head Coach Brad Arthur has kept with the same 17 that came away with a victory at Bankwest Stadium last week.

Oregon Kaufusi, Daniel Alvaro, Will Smith and Ethan Parry are the reserves.

For the home side, Sea Eagles Head Coach Des Hasler welcomes back Tom Trbojevic at fullback who was rested last week after the State of Origin series decider.

Brendan Elliot moves back to the reserves, while Lachlan Croker retains his spot on the bench.

Looking to bounce back after a one point defeat to the South Sydney Rabbitohs last week, the Sea Eagles currently sit in fourth and have shown lots of resilience this season, despite a long list of injuries and absences.

Before last week’s defeat, the Sea Eagles had three consecutive victories. The sixth placed Eels enter this clash with three wins in a row, the first time this season and the first time since 2017.

A rivalry that goes far back, the Sea Eagles hold the head to head advantage with 83 wins from 139 clashes. At Lottoland, the home side also have 43 wins from 64 games, including a 54-0 drubbing in the corresponding clash last year.

In the last time these two sides met, the Eels came away 44-10 victors at ANZ Stadium and have won 7 of the last 8 clashes.

Manly's big men will be looking to turn up the heat on the fragile Eels defence. With Martin Taupau and Addin Fonua-Blake leading the charge the Sea Eagles are at or near the top of the rankings for line breaks, run metres, post-contact metres and offloads.

Hooker Reed Mahoney will be leading from the front as the Eels defence looks to lift its game and contain Manly's many weapons. The Parramatta hooker is the NRL's top tackler with 775 and shoulders a huge burden in the team.

Mitchell Moses will be under pressure to continue his fine performances with both boot and ball in hand. The halfback, among the competition's best for try and linebreak assists, will have to win the field position battle and ensure attacking weapons like Gutherson and Maika Sivo get the ball where they can do the most damage.

The half finished last week’s victory with a perfect night with the boot, kicking 7/7 to go alongside his 1 try assist, 15 tackles and mammoth 620 kick metres. 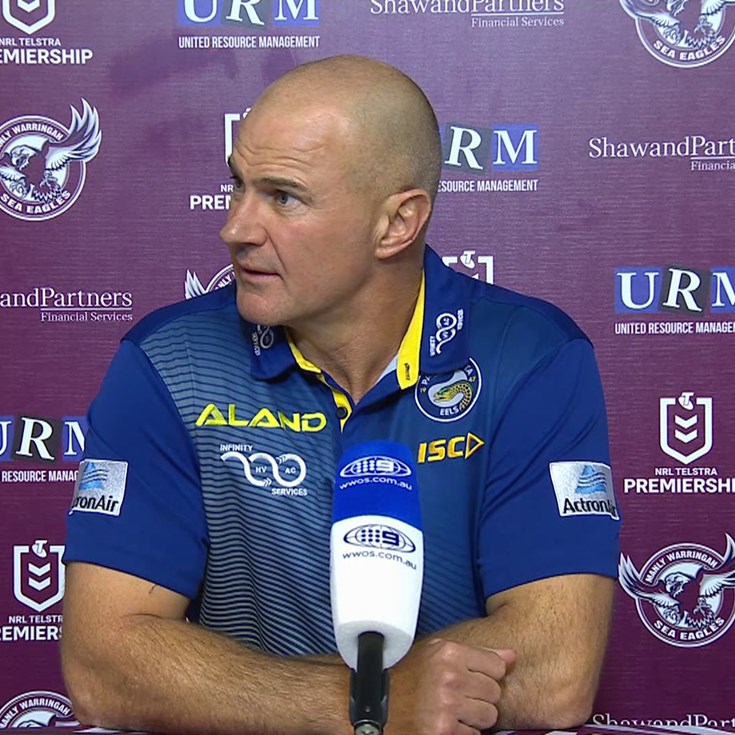 Sea Eagles too good for Eels at Lottoland