Instead, the Eels skipper is happy to take the positives from the other 79 minutes and 50 seconds into Wednesday night's do-or-die Origin II clash at ANZ Stadium.

Gutherson hasn't got through an interview since last Wednesday night's 18-14 loss to the Maroons at the Adelaide Oval without being asked about the huge Kurt Capewell fend in the lead up to AJ Brimson scoring Queensland's opening try.

So when NRL.com begins a line of questioning about how quickly Gutherson's right edge defensive partnership with Nathan Cleary and Josh Addo-Carr had developed, the Eels skipper heads there himself.

"We felt really comfortable the whole time we've been training and in the game – there was that one slip up from me with that tackle on Capewell that they made us pay for but other than that we felt very comfortable as an edge," Gutherson sad.

"It's just that one missed tackle from me, I put my hand up and took that, I have to be better there and other than that we felt good so full game under the belt and another week of training will go a long way."

Gutherson finished with 32 tackles and just two missed. That's one tackle fewer than the rest of the back five combined and a better defensive stat line than anyone else in the Blues backline and a couple of the forwards.

"I haven't made 32 tackles in three years!" Gutherson laughed.

"I was pretty sore after the game. That's all people want to look at is that one missed tackle and in Origin they can make you pay so it's pretty disappointing but I've moved on and learned from it, I'm pretty good like that, just learn from it and try and improve myself for the next week."

That Blues right edge came under heavy fire several times in Origin I but outside the one miss on Capewell there were no line breaks or tries in that channel.

With the ball, Gutherson helped outside man Addo-Carr to two tries and had one further line break assist as well as asking plenty of questions of the Queensland defence.

"I was super positive with how it all went," Gutherson added.

"Obviously the one tackle is what people want to focus on but I felt super comfortable out there, did my part and I can only get better."

Despite calls from some quarters for a specialist centre, and despite the success the Blues had with Jack Wighton and Tom Trobjevic in the centres last season, it's not as if Gutherson is a stranger to the role. He played at least some centre at NRL level every year from 2015 to 2018.

"I played a fair hunk of centre coming through and the transition felt smooth and I've got some great players around me to make things a lot easier," he added.

"Second game in will feel a lot more comfortable but I felt good out there game one."

With the Blues taking a four-forward bench into game two, Gutherson could wind up being the playmaking back-up if there are any injuries (with Isaah Yeo a likely stop-gap centre option).

Ownership and dominance at forefront for Cleary

"Everyone was so stoked for Browny, knows how hard he works and what he brings to a team," he said.

"I think he's built for this type of arena, he can come on for 30 minutes and go mad, take some heads off and play some footy as well. Everyone's so excited, he's prepping well, he's been working hard for this for a few years now." 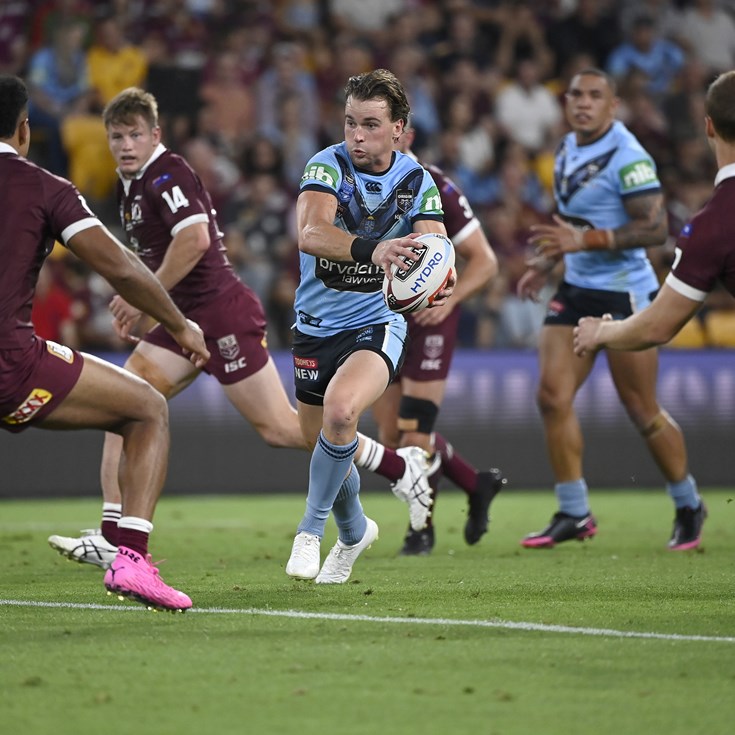