Ryan Matterson was sent off for a high shot on Brad Parker as Manly dealt a brutal blow of their own to Parramatta’s premiership hopes with a 56-10 win at Sunshine Coast Stadium on Saturday night.

Parker’s head knock and the send-off saw 18th man Moses Suli activated and the new man scored in the corner with his second touch of the ball shortly after then doubled up three minutes later following Marata Niukore’s sin-binning for a professional foul.

Sea Eagles coach Des Hasler was unsure of Parker's availability for next Friday against the Raiders.

"He's a bit sick, a bit sore. But we'll go through the normal concussion protocols now. It's a short turnaround so at this stage it might be difficult," Hasler said.

Eels coach Brad Arthur didn’t shy away from the force of Matterson’s tackle but said it was not intentional.

“I think he made contact with his head. It was an accident; a tackle gone wrong,” Arthur said. “There’s no malice or intent in it. He just got it wrong.”

The out-of-sorts Eels conceded four tries while down to 11 men with second-rower Haumole Olakau’atu touching down after Dylan Walker threaded through a clever grubber and Reuben Garrick completing a hat-trick.

In all the Sea Eagles ran in 10 tries while registering their fifth 50-plus score in 11 games and pushed ahead of Parramatta into fifth place on points differential.

Fullback Tom Trbojevic was again supreme while halves Daly Cherry-Evans and Kieran Foran are channelling the glory days of a decade ago.

The pair came together in the 2011 season and won a premiership for the Sea Eagles, and here they are 10 years later, reunited, and trying to do it all over again.

"I don't think it's anything at all like 2011. I just think they're playing really good footy, they're experienced, they work well together," Hasler said. "We've just got to maintain it."

Winger Reuben Garrick continued his breakout season with 28 points from a hat-trick and kicking eight goals.

He has now set a new record for most points in a season for Manly, surpassing Matthew Ridge's 1995 mark of 257 points.

"It's fantastic. Reuben works really hard at his game. So it's very deserving but he'd be the first to say he's on a fair backline with a lot of boys working hard to set up those try assists. He'd be grateful," Hasler said.

“It is special. Ridgey was also ultra-competitive, so it’s a great personal achievement for Reuben as well.”

With the Eels needing to show their supporters, and the rest of the top-eight, they were not a spent force, the start tonight couldn’t have been any worse for Parramatta.

Manly held onto the ball for six straight sets, made five line breaks and scored two tries. The Eels didn’t get to the pass the ball until the 10th minute, when the score was 10-0

By the 30th minute Manly had scored five tries – Tom Trbojevic and Garrick among them, each grounding their 19th try for the season. The score was out to 26-0.

Even having Reed Mahoney (shoulder) back in the side wouldn’t have helped. The Manly back-five were creaming their opposite numbers out wide, on both sides of the field.

The Sea Eagles came off the boil slightly in the second half, as the Eels enjoyed far more ball. But then the floodgates opened once more for Manly and the ill-discipline seeped into Parramatta.

Quick hands has Saab diving over

They did score a try in each half – to Tom Opacic and Waqa Blake – but they missed 41 tackles and didn’t complete 10 of their 30 sets.

Manly made 14 line breaks in total, to the Eels one, to further underline the Sea Eagles dominance.

Hasler said coming off the back of a 10-point loss to the Storm, his side registering a 46-point win a week later showed a lot of character.

"I'm not being facetious but it was just important we got the win tonight," he said.

"We come up against a side next week that are also in a situation where they are desperate, in the Raiders. So it's another hard one."

Putting a damper on all that success though was three Manly players attracting interest from the match review committee.

Dylan Walker and Josh Schuster are both on report for late tackles on kicker Mitch Moses, while prop Josh Aloiai was penalised for a shoulder charge on Shaun Lane. 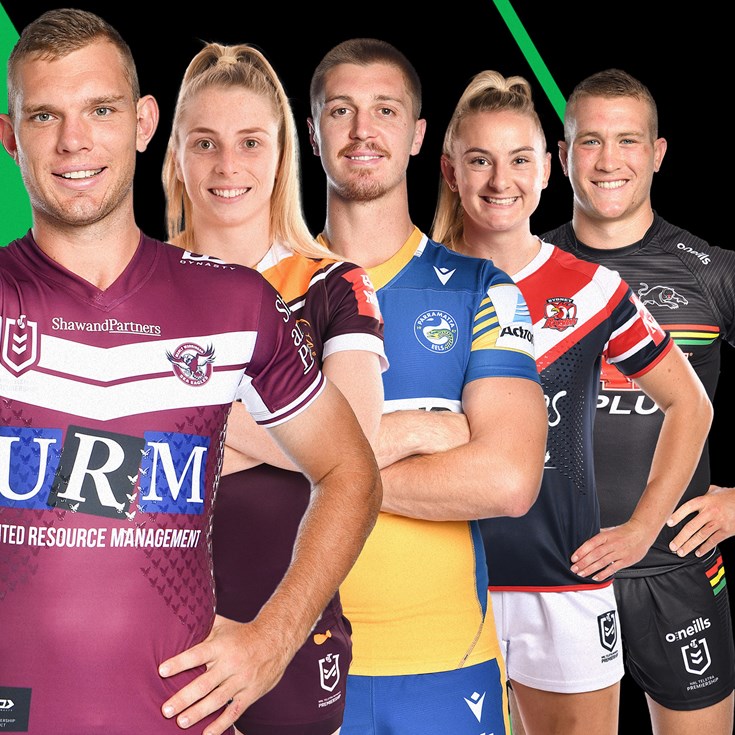 Shaun Lane excels on- and off-field